By Johnny Edward:
Ezekiel Henty believes he is ready to return to action after recovering fully from a horrific injury in NK Osijek’s 5-1 win over NK KRK in Second Round of the Croatian Cup in October, reports Completesportsnigeria.com.

The Nigeria striker, 26, suffered a muscle injury and was sidelined for six weeks, missing four matches, but he is poised to return for Sunday’s clash against second placed Lokomotiva Zagreb away.

“Of course it’s good to be back. It has been close to two months since I last played and I am delighted to be back in the team for the clash against Lokomotiva Zagreb,” Henty, a former AC Milan Primavera star told CSN. 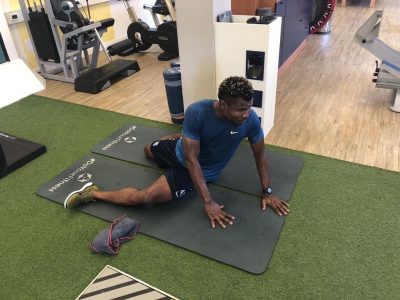 Henty stretches in the gym

“I hope to have a good game and hopefully get a lot more games. I feel better and stronger and hopefully, that will benefit me.

“It’s a great team spirit at this place and we’re in a good place at the moment. Hopefully, we can kick on after the good games we’ve had over the last few weeks.”

Henty scored three goals in nine league games prior to his injury.