Completesportsnigeria.com’s ADEBOYE AMOSU appraises the performance of Super Eagles players in the 2-1 defeat against Argentina in their Group D clash at the 2018 FIFA World Cup…

FRANCIS UZOHO 7/10
Conceded twice in the game despite having little to do. The young goalkeeper will need to work on his ball distribution ability but he was alert and made some key saves

LEON BALOGUN  6/10
He was one of Nigeria’s top performers on the night. The centre-back put up a solid showing despite relentless pressure from the Argentines.

WILLIAM TROOST-EKONG 6/10
Had a torrid time stopping Gonzalo Higuain but still put in a decent showing.

KENNETH OMERUO  6/10
Lost Lionel Messi for the first goal but recovered from the early setback to prove his importance to the team especially in the second half.

VICTOR MOSES 5/10
Not one of his performances for the Super Eagles despite grabbing a goal in the game. The Chelsea man was at fault for Argentina’s second goal scored by Marcos Rojo.

BRYAN IDOWU  6/10
The Amker Perm of Russia defender  was solid at the back but didn’t offer much going forward. 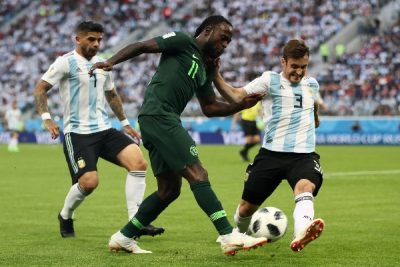 WILFRED NDIDI 7/10
Came alive  after the break following a tepid first half. He was close to getting a goal with his well struck shot almost hitting the net.

MIKEL OBI 7/10
A better performance from the captain who came alive like most of his teammates in the second half.

OGHENEKARO ETEBO 7/10
He was at his combative best in the game. Came close to  registering his first goal of the competition with his second half free kick nearly sailing into the net. 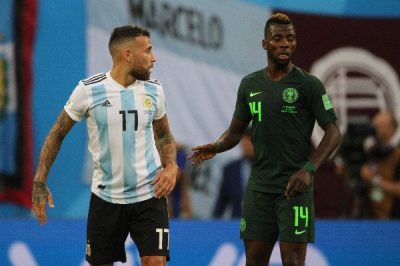 KELECHI IHEANACHO 4/10
Put up a shambolic performance and was duly substituted after the break.

AHMED MUSA 8/10
Lively as ever. He was a torn in the flesh of the Argentina defenders. He was Nigeria’s best player on the night

SUBSTITUTES
ODION IGHALO 5/10
The China-based forward added bite to the Super Eagles attack following his introduction but missed two gilt-edged chances that would have aided the Super Eagles qualification into the second round.