Herrera: After Spending £212m On Transfers, Pressure Is On Man City To Win Premier League With just five games into the season, the mind games have begun and Manchester United midfielder Ander Herrera believes all of the pressure in the Premier League title race is on Manchester City after they spent heavily following a trophyless campaign last term.

The city rivals have identical records so far this season as they sit joint-top of the table with 13 points, 16 goals scored and two conceded from five games.

City’s strong start to the season comes after the club spent over £200million on new players during the close-season, with Benjamin Mendy, Bernardo Silva, Kyle Walker, Ederson and Danilo accounting for much of that expenditure. 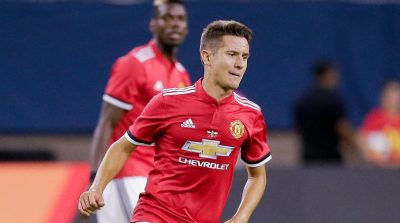 And Herrera feels that City’s transfer dealings make them favourites for the title, and as such, he believes the pressure is on them, rather than United.

“They are under pressure. They are obligated to win something. They have more obligation than us.

“City have spent the biggest amount in the Premier League so they are the principle contenders for the title.

“We have quality as well, but because of the money they have spent, they are the favourites.

“We will try to be there. There is pressure when you spend a lot but there is also pressure on us because we are the biggest club in England.

“But you know when you play for United that you are under an obligation to win things and I like that obligation.”