Hierro Quits As Spain Coach On Mutual Consent With FA Hierro, 50, who replaced Julen Lopetegui as stand-in boss before Spain’s doomed World Cup campaign has also turned down the option to return to his previous role of sports director.

Spain lost on penalties to hosts Russia in the second round last Sunday.

“After many kilometres of walking together, the Royal Spanish Football Federation and Fernando Hierro put an end to their relationship once the participation of Spain in the World Cup in Russia ended,”

“The last Spanish coach declined to return to his previous position as sports director of the RFEF to seek new horizons and undertake new professional challenges. 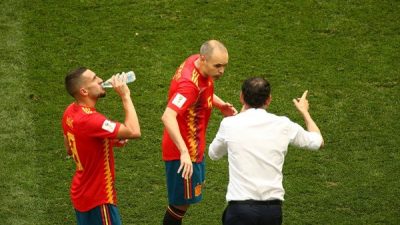 “After two stages as sports director of the Federation, the first between 2007 and 2011 – coinciding with the best stage of the National Soccer Team, which won the 2008 European Championship with Luis Aragonés as coach and the 2010 World Cup with Vicente del Bosque- and the second from November 2017 until now, the RFEF wants to thank Fernando Hierro for his commitment and sense of responsibility when he takes the lead in the national team in extraordinary situations as well as in the performance of all his duties, which will always be his home.

“The Federation wants to highlight the professional and human values ​​of an extraordinary athlete.

“Thanks for everything, Fernando!”