The quarter-finals of the ongoing Higher Institution Football League will take centre stage on Wednesday, September 5 (today) and Thursday, September 6, as the schools battle for the final four slots.

Top on the bills will be the battle between OAU Giants and UNIBEN Royals in Benin while the fans in Calabar will have the opportunity of watching the game between the host, UNICAL Malabites and DELSU Titans from Delta State.

UNIJOS Highlanders will play host to UAM Tillers with all games coming up on Wednesday while UDU Sultans and UNILORIN Warriors will square up in Sokoto on Thursday.

The second leg of the quarterfinal games has been scheduled for Wednesday, September 19, with all the teams playing away this midweek hosting their opponents at home.

Speaking with our correspondent, the Technical Coordinator of the league, Mohammed Ibrahim, the technical committee will soon come together to agree on a venue for the final four. 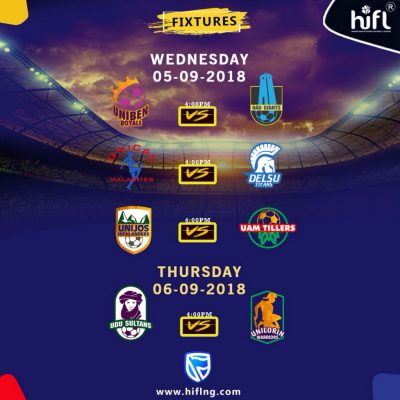 “We have been having a wonderful competition so far and very happy with the performance of all the teams participating in the league,” he said.

“This is the first edition of the competition and hopefully we can move on from the lesson learnt so far this year.

“We are looking at playing the final four in Lagos but we are yet to arrive at a conclusion. We want to give the sponsors value for their support by coming up with an elaborate semifinal game.”

A total of 16 teams started the competition with eight already eliminated.