The four Nigerian clubs competing in the CAF Champions League and Confederation Cup will look to make a big impact in the competitions this weekend in the decisive second legs,  Completesportsnigeria.com’s ADEBOYE AMOSU here takes a look at their chances of progressing further in the competition…

The Nigerian champions recovered from their poor start in the first leg to score two vital goals which could prove vital at the end of the day. The Jos club who are participating in the CAF Champions League for the first time will not enjoy the luxury of hosting Etoile du Sahel at their home ground in Jos following protest by the North Americans on the suitability of the venue.

They can however bank on the football-mad Kano fans to flood the Sani Abacha Stadium to give them total support on Sunday.

Kick-off has been fixed for 2pm Nigerian time which could also be to Plateau United’s advantage as the Tunisians are expected to struggle under the hot Kano sun.

With Okiemute Odah out of the game due to a harmstring injury, Dele Ajiboye is expected to take over goalkeeping duties while the likes of Tosin Omoyele, Peter Eneji, Raphael Ayagwa and King Osanga are expected to be the key men for Kennedy Boboye’s men once again.

VERDICT: Plateau United have enough quality to see this through but must be careful not to leave themselves too open at the back. An early goal will also boost their confidence in what is expected to be a tough encounter.

MFM VS MC ALGERMFM FC did well to earn to a 2-1 win in the first leg at the Agege Stadium last week but the reverse fixture will be a different scenario. The Olukoya Boys were slightly outplayed by the former African champions in that game and again missed their key stars who were not eligible for the clash.

MC Alger totally destroyed Otoho of Congo 9-0 in their last home game in the CAF Champions League after going down to a 2-0 defeat in the first leg and no doubt have the quality to record another important win in this encounter.

MFM coach Fidelis Ilechukwu will look up to the likes of captain Austine Opara, Julius Emiloju, Okorom Stanley, Jonathan Zikiye and Tchato Gichard to help keep things tight at the back but he is short of quality and experienced options upfront.

Chijoke Akuneto has been the talisman for the Lagos club in this competition with two goals and Nojeem Akinyemi had a good a game in the first leg but they do not offer much like the trio of Sikiru Olatunbosun, Waheed Adebayo and Jesse Akila.

VERDICT: It will take more than a miracle for MFM to scale through this hurdle, at least going by the performance of both teams in the first leg and what they have done in the competition this year.

The game will also kick-off at 7.pm Nigerian time when the weather will be a bit cold, a factor that could affect MFM’s performance. 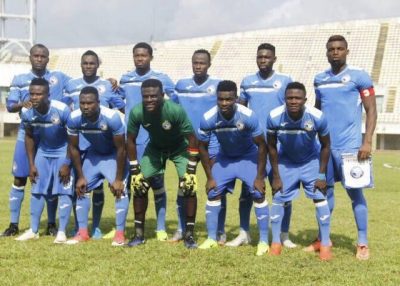 ENYIMBA VS ENERGIE FCThis should be a stroll in the park for the two-time African champions who defeated their hosts 2-0 in the first leg Wednesday last week. The Aba giants must now be looking forward to who their second round opponents will be and possibly a slot in the group stage.

The game offers Enyimba coach Paul Aigbogun the chance to feature some of his fringe players ahead of a busy schedule.

VERDICT: With a comfortable first leg advantage, Enyimba will complete the job at their makeshift home ground the UJ Esuene Stadium, Calabar and ease into the next round.

The Promise Keepers who are competing in the CAF Confederation Cup for the second time have lost their two previous home games in the competition against Vita Club Mokanda of Congo and Banjul Hawks of Gambia.

They will however hope for better luck on Sunday as they bid to overturn the 1-0 first leg deficit against the Libyans.

VERDICT: With an attacking line-up that has the likes of Victor Mbaoma, Adeshina Gata and Christian Pygbara, Akwa United have enough firepower within their ranks to overturn the deficit.