Disgraced wrestling great, Terry Gene Bollea (aka, Hulk Hogan) is on the verge of making a return to the World Wrestling Federation (WWE) after three years following his exit over racial comments in 2015.
Hogan, 64, a former WWE heavyweight champion, was kicked out after audio emerged of him on a racist rant.
Following the racial remarks, Hogan’s merchandise was removed from the WWE Shop, references to him were wiped off from WWE television, and his character axed from video games WWE 2K15 and 2K16.
Also, he was officially removed from the WWE Hall of Fame.
But according to dailystar.co.uk, radio host, Howard Eskin, who had Hogan as a guest on his show The Howard Eskin Show radio programme over the weekend, hinted that the 12-time world champion is set for a return to WWE.
“The Hulkster, he really is a good guy and we didn’t talk about it, because it’s not done yet but it’s all but done,” Eskin stated. 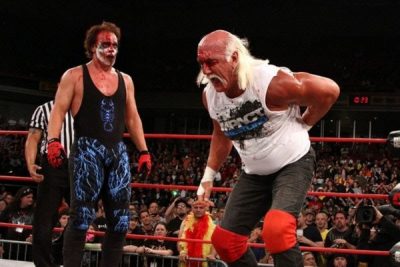 “He’s coming back to the WWE and from what I understand, and again, we didn’t talk about it, he’s going to wrestle again at an event.”
Hogan’s last match happened back in 2012 when he was working for WWE rival Impact Wrestling.
He wrestled in a six-man tag match alongside Sting and James Storm against Bobby Roode, Bully Ray and Kurt Angle.
Copyright © 2020 Completesports.com All rights reserved. The information contained in Completesports.com may not be published, broadcast, rewritten, or redistributed without the prior written authority of Completesports.com.