Iceland Coach, Keeper: We’re Not Better Than Nigeria, We’ll Play To Our Strengths Despite Iceland’s draw against Argentina and the Super Eagles’ defeat to Croatia, the Scandinavian debutants are not carried away, their head coach Heimir Hallgrimsson insists.

Iceland came into the World Cup as underdogs, but after the shock draw with the two-time world champions and 2014 finalists, Hallgrimsson’s side have caught the world’s attention, just like they did at the European Championship in 2016 where they reached the quarter-finals on their debut.

“We are not of the opinion that we are at all better than Nigeria. We know our strengths, and need to make the best of them,” Hallgrimsson told FIFA TV.

The strengths of Iceland include excellent defensive organisation and effectiveness at set-pieces both in attack and defence.
Incidentally, Nigeria’s major weaknesses are uncoordinated play and poor set-piece defending.

When Iceland suffered their biggest defeat in nine years in a competitive match, going down 5-2 to France in the UEFA Euro 2016 quarter finals, they had 47 per cent possession. When the team have achieved their best results in recent times, against Argentina, England, Austria and Portugal, they averaged 27 per cent.

In essence, Iceland are prepared to cede possession in the quest for victory. 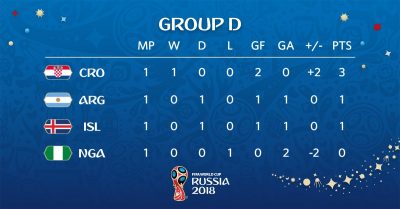 “We knew [Argentina] would have the possession, they have many of the best attacking players in the world. But we have a team that is at its best when we have the opposition in front of us, and we have clinical attacking players when we attack,” Iceland keeper Hannes Halldorsson said after the draw against Argentina, in which he saved a Lionel Messi penalty.

“We were happy with that match. It was not a thundering offensive display, but we knew how the game would unfold and we were ready to defend for 90 minutes. The boys did that well.”