Ideye Starts As Malaga Lose At Home To Real Madrid Goals from Isco Alcaraz and Casimero ensured Real Madrid reclaimed third place in the LaLiga table despite a consolatory goal from Diego Rolan in the 90th minute.

Malaga who have just one league win in their last 17 La Liga matches are rock bottom in the table with 17 points from 32 games.

Madrid on the back of their semi-final triumph over Juventus outplayed Malaga in the first half and created more chances.

Isco got the Los Blancos off to a good start in the 29th minute curling in a free-kick.

Malaga had a chance to get back into the game in the 44th minute when Casimero made a defensive blunder but Manuel Iturra failed to beat Keylor Navas from close range.

In the second half, Real Madrid maintained their dominance and got a second goal through Casimero in the 60th minute. Diego Rolan pulled one back for Malaga in added time.

Ideye was replaced with Maxime Lestienne in the 78th minute.

Ideye who missed his side’s last three games extended his goal drought to five games in the encounter.

The game was Ideye’s eighth for Malaga since he joined them in January. 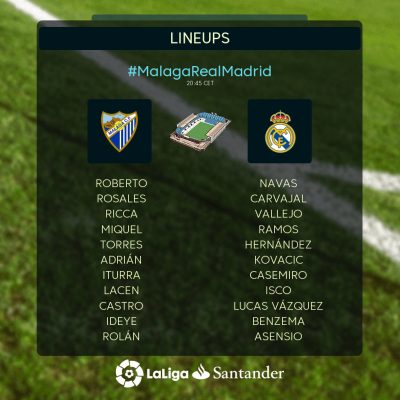