Super Eagles defender Bryan Idowu has admitted that his Russian side, Lokomotiv Moscow were too nervous in their 3-0 defeat away to Galatasaray in Tuesday’s UEFA Champions League Group D match played at the Turk Telcom Stadium Arena, Istanbul, reports Completesportsnigeria.com.

Idowu made his debut in the UEFA Champions League in the defeat. The game was also his second appearance of the season for the club.

Goals from Garry Rodrigues, Eren Derdiyok and a 90th-minute penalty from Selcuk Inan earned a matchday 1 win for the Turkish Champions, Galatasaray at the expense of Lokomotiv Moscow.

“Perhaps we were too nervous at the beginning of the match. The goals Galatasaray scored came from nowhere,” Idowu told sports.ru.

“For a while, we managed to control the game but not for long.”

“It was a cruel defeat. We played well for 60 minutes. Idowu? He was ok,” Semin remarked during his post-match press conference. 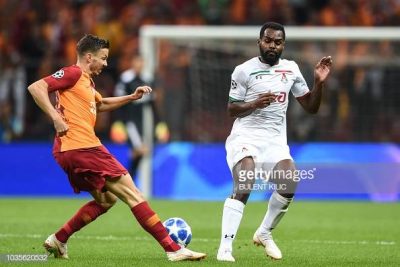 “How can you be satisfied when you lost 0: 3. The result determines a lot. Idowu played well. He came out in his position. Nothing unexpected. The Three central defenders were also in their places. If you lose 3-0 then the tactics did not justify itself.”

He hopes that his charges banish the disappointment from the defeat at Galatasaray in their next Russian premier league clash with Zenit Saint Petersburg.

“Zenit game? We need to recover psychologically. Players are very upset. Now we can be criticized,” he said.

Idowu is expected to keep his place in Lokomotiv’s starting lineup in their away match against Zenith at the Krestovsky Stadium, Saint Petersburg on Sunday.