By Johnny Edward: Nigeria striker Odion Ighalo was on target for the Super Eagles European All Stars who drew 3-3 with Westerlo Football Academy at the Bet9ja end-of-the-year friendly game played at the Rvtc Mini Stadium, Isheri Ojodu, Lagos on Friday.

First half goals from Sunday Emmanuel and Ighalo gave the Super Eagles European All Stars team a 2-0 lead into the break.

Substitute Victor Osimhen, who plays for Wolfsburg in Germany, made it 3-0 with an easy tap-in after Westerlo Football Academy defence failed to clear their lines.

Westerlo however fought back with goals from Afeez Segun, Emola Idris and Andrew Ojukwu. 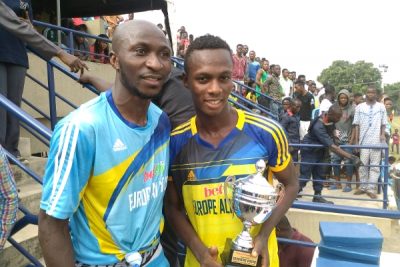