Ighalo Wins CSL Player Of The Month Award For April Changchun Yatai striker, Odion Ighalo has been named the Chinese Super League player for the month of April reports Completesportsnigeria.com.

The Super Eagles striker celebrated his April award by retweeting his official fans congratulatory message via @judeighalofans on Wednesday.

“Best Player Of The Month Of April!!! Congratulations Odion Ighalo!!!!!!,” reads the tweet with a picture of the Nigeria international posing with the award.

Ighalo scored six goals in the month of April to win the award. 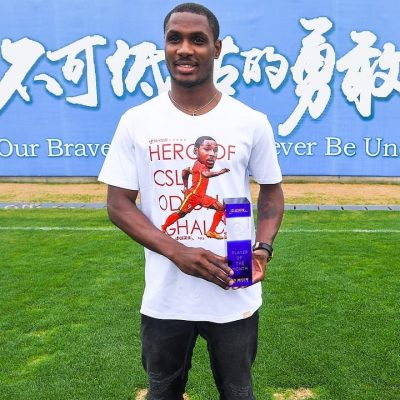 The former Watford striker has netted seven times in 10 CSL games this season and is expected to feature for Changchun Yatai when they host Beijing Guoan in Saturday’s Chinese Super League clash.

Ighalo is also listed in Nigeria’s 30 man provisional squad for the 2018 FIFA World Cup in Russia.