It was the 11th time this season he was benched in the EPL.

Jonjo Shelve scored an eight minute goal to give the Magpies the lead. Ayoze Perez sealed the win in the 75th minute of the encounter. Jamie Vardy scored a consolatory goal in the 89th minute.

Iheanacho has made 15 EPL appearances this season, scoring just one goal. Super Eagles midfielder Wilfred Ndidi was suspended for the clash.

At the Vitality Stadium, AFC Bournemouth forced Crystal Palace to a 2-2 draw.
Luka Milivojevic scored two minutes after the restart. Lys Mousset pegged the Eagles back in the 65th minute before Wilfred Zaha made it 2-1. Joshua King rescued a point for Bournemouth in the 88th minute. 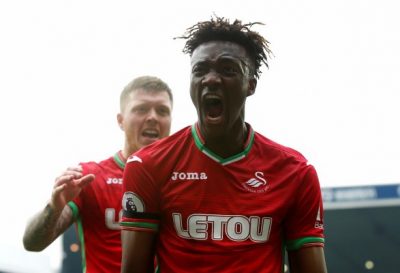 Huddersfield Town held Brighton Hove Albion to a 1-1 draw at the Amex Stadium.
Jonas Loessl scored an own goal to give Huddersfield Town the lead in the 29th minute before Steve Mounir drew level three minutes later.
At the Bet365 Stadium, Tottenham Hotspur beat Stoke City 2-1 to consolidate their place in the race for a top four finish.
After a goalless first half, Christian Eriksen scored the opener in the 52nd minute but Mame Biram Diouf restored parity five minutes later.
Eriksen made it 2-1 in the 63rd minute. Tottenham maintain their fourth place position and are now tied on the same points 67 with Liverpool who drew goalless with Everton in the Merseyside derby earlier on Saturday. 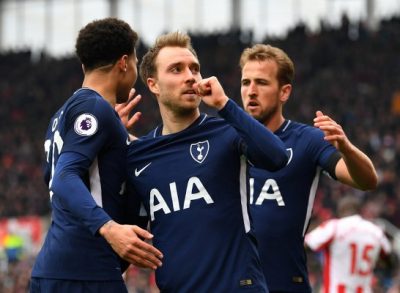 At Vicarage Road, Watford lost 2-1 at home to Burnley. Goals from Sam Vokes and Jack Cork for Burnley cancelled out Roberto Pereyra’s 61st minute goal.
At the Hawthorns, West Brom played out a 1-1 draw with Swansea. Nigerian-born English striker Tammy Abraham salvaged a point in the 75th minute for the Swans after Jay Rodriguez’s opener in the 54th minute.
Fastest Paying Betting Site in Nigeria: Grab your 140% First Time Deposit Bonus Now — www.Sportybet.Com Copyright © 2020 Completesports.com All rights reserved. The information contained in Completesports.com may not be published, broadcast, rewritten, or redistributed without the prior written authority of Completesports.com.