Super Eagles forward Kelechi Iheanacho was on as a substitute for Leicester City who lost 2-1 to Burnley in the English Premier League on Saturday.

Iheanacho replaced Shinji Okazaki in the 46th minute and received a yellow card in the 87th minute.

Goals from Chris Wood in the sixth minute and Kevin Long in the ninth minute gave Burnley a two-goal lead before half time.

Jamie Vardy grabbed a consolatory strike for the Foxes.

The game was Iheanacho’s 16th appearance in the EPL this season. The Nigeria forward has scored once and provided two assists.

Burnley are now seventh with 52 points from 33 games, while Leicester are eighth with 43 points.

At Selhurt Park, a brace from Wilfred Zaha and another goal from James Tomkins gave Crystal Palace a 3-2 win over Brighton Hove and Albion who had goals from Glen Murray and Jose Izquierdo. 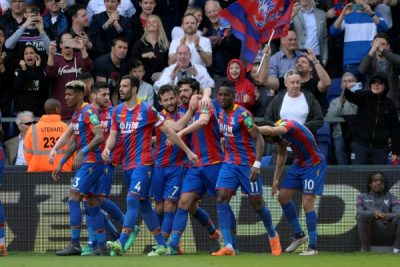 At the Liberty stadium, Swansea were held to a 1-1 draw at home to Everton.

Kyle Naugton scored an own goal to give Everton the lead after 29 minutes before Andre Ayew restored parity for the Swans.

Swansea remains 17th in the English Premier League table with 33 points from 33 games with Everton ninth on 42 points.

Huddersfield Town defeated Watford by a 1-0 at the John Smith Stadium.

Tom Ince scored a 90th minute goal for Huddersfield Town in the encounter.

Huddersfield Town are now 14th in the EPL log with 35 points from 34 games. Watford are 12th with 37 points.