The goal was Iheanacho’s second in the league this season after making his 20th appearance.

The defeat means Arsenal have failed to secure a single away point in 2018.

Also, Arsenal have now lost seven consecutive top-flight away matches for the first time since January 1966.

Iheanacho broke the deadlock in the 14th minute as he hit a low shot off a knockdown from Fousseni Diabate past Petr Cech.

In the 15th minute, Arsenal were reduced to 10 men following a straight red card to Konstantinos Mavropanos who pulled down Iheanacho who was clean through on goal.

Arsenal were back on level terms in the 53rd minute thanks to Pierre-Emerick Aubameyang who slammed the ball into the roof of the net after his initial shot off a pass from Ainsley Maitland-Niles’ cross was stopped by Eldin Jakupovic.

In the 76th minute, Leicester were back in front as Jamie Vardy scored from the penalty spot after Henrikh Mkhitaryan fouled Demarai Gray.

And in the 90th minute, Riyad Mahrez made sure of the points for Leicester as he raced on to a pass, beat his marker before firing past Cech to make it 3-1.

Arsenal stay rooted in the sixth position on 60 points on the log while Leicester are now ninth on 47 points.

At Stamford Bridge, Chelsea’s hope of a top four finish in the Premier League suffered a setback as they were held to a 1-1 draw by Huddersfield Town. 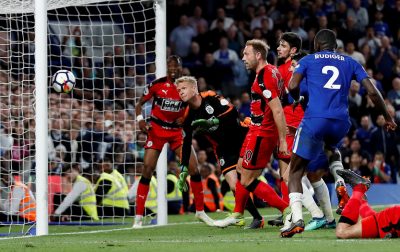 Huddersfield took a surprise 1-0 lead in the 50th minute as Laurent Depoitre scored from the rebound as his first effort was saved by Willy Caballero.

Chelsea equalised in the 62nd minute through Marcos Alonso who got the last touch from Mathias Zanka attempted clearance.

The draw saw Huddersfield confirm their safety in the Premier League for next season.

Chelsea remain fifth on 70 points after 37 league games in the league table, two points adrift of fourth-placed Liverpool with only one round of games left.