Ikpeba: Whatever Happens, Super Eagles Must Not Lose To Croatia I have listened to a lot of folks saying we will thrash Croatia, we will win the World Cup and nobody can stop us. It’s okay to be patriotic but people must learn to have respect for the opposition especially one like Croatia which comes with a lot of quality players, talent and experience. They won’t be push overs. I know Nigerians always want their team to do well and win big but Croatia will not be a pushover. If we win, we must show that we deserved it.

Having said that, I agree we MUST beat Croatia. It may sound like a difficult task but it is not impossible. To beat them, we have to play as a team. We have to attack and defend massively. Communication is very key. Errors must be minimised. The senior players must show their experience. The Captain must carry the team with everything he has. This is when he’s needed most. He may be tempted to move forward but he must show self-discipline and talk to everybody around him.
Winning this game is very crucial. Looking at 1994 and 1998, winning the first game was very crucial for us and it launched our achievements in both editions of the World Cup. When you win your first game, you are like 60 percent through to the next round.

It’s key, psychologically, to win our first game and the players must have self-belief. That’s what helped us in 1994 and 1998 because nobody gave us the chance to do anything. In 1994, it was our first time and nobody felt we could do much until we surprised Bulgaria. I’m not sure we really outplayed the Bulgarians on the field tactically but our self-belief and desire made the difference. In 1998, we had some not too good results in our friendly games and people felt Spain were going to crush us but, again, we dug in and gave 200% each on the day.

A lot have been said about what formation to use against Croatia but, back then against Spain, it was not about the formation on the day but the willpower to go the extra mile. Any formation can win the game. I have listened to everybody talking about 3-5-2 as if all you have to do is just to show up on the day, play 3-5-2 and you automatically win the game. That’s not correct. I’ve never been a fan of rigidity for one plan. Rather than the formation, it is the commitment, the desire that you take into games that will determine what you get from it.

In our time, you could see the effort that the players put into the game, fighting for each other, that gave us that crucial win against Bulgaria in ’94 and the win against Spain in ’98. The players must fight for one another and keep away the desire for individual glory. It’s not about the formation but the courage, desire and communication during the game that will make the difference. If they play as a team and work hard for each other, sometimes they might not play the fancy pretty football that we have come to associate with the Super Eagles but they would have gotten the result and that is more important. So the attitude will matter. Playing for national pride will also help them push beyond their normal abilities. Playing for the flag is an honour so they have to show by their desire that they deserve to be in the team. 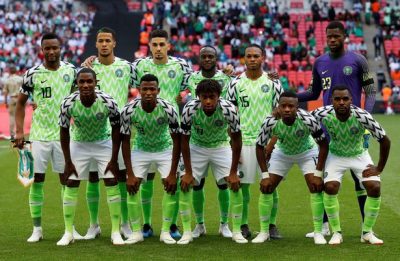 I watched a clip of the game against Spain at France ’98 and it brought back memories of that time. The mood going into the game was war-like. We were ready to shed sweat and blood on the pitch. Like now, we lost all our friendly games before the World Cup and nobody gave us a chance. We lost to Holland and Yugoslavia so nobody gave us a chance against Spain who were coming on the back of impressive form and results. We fought for each other, chased down every ball and made life very difficult for Spain. That is the way to go against Croatia too. Communication is key. Thankfully we have a coach who’s mature and experienced. We should not forget we have a very young team. This is the first big competition for most of them so we don’t want them to panic. I hope they will not panic or get nervous when the game kicks off. The ’94 and ’98 sides had players who were battle-hardened and very experienced. Most of them were playing in the biggest teams abroad so there was no fear in our heart at the time. This is not the case with this team so whatever they do, they must play together and win together.

Some people have tried to draw parralels between our game against
Spain and the game against Croatia on Saturday. They point at the poor friendly results we got in 1998 and the results of this team but I don’t want to make any such comparisons until after our game. Like every passionate Nigerian fan, I hope it ends like we ended against Spain at France ’98 but let’s keep our fingers crossed.

I think Nigerians, especially those of us on Social Media, are putting undue pressure on this team. I understand our passion for the game but we should also remember that these players also use Social Media and they are likely to see whatever we put there. When those things are negative, it could shake their confidence and affect their game. We were not happy with their performance against Czech Republic for example so it behoves on the players to go out and correct their mistakes in the next game. Football is part of life and life is full of critics so they should take the criticism well. When you do well, they praise you. When you don’t perform to expectations, they have a right to be critical too. Nigerians want their team to win always whether it’s a friendly game or the final of the World Cup.

If we beat Croatia we would have done the hardest part of the job. That would mean three points in the bag and we would be facing an Iceland team that, all things being equal, would have lost to Argentina and will be demoralised. So we could just wrap up qualification even before the last game against Argentina. But, like I said, we must believe, work hard and show respect to the opposition. Already I think Croatia are showing much respect for us and that’s the way to go. Anything we do, we must not lose against Croatia. It could mean the difference between whether we stay or exit the competition.

If we don’t win, then we must not lose. If we draw Croatia and get a win against Iceland, then we can fight for another point against Argentina and that will be enough to get us into the next round. But a loss will be a disaster.

All of us want to see Nigeria win. I’m a Nigerian so, by inference, I also want us to win so I’m going for a Super Eagles victory against Croatia. I don’t want to be categorical about scoreline. I correctly predicted the scores of the game against England but this time I don’t want to predict. Any result that means three points for Nigeria is good enough for me. Up Nigeria!