By Nurudeen Obalola:
Nigerian forward Peter Olayinka is happy with his progress this season as he seeks to help Zulte-Waregem qualify for next season’s UEFA Europa League, Completesportsnigeria.com reports.

Olayinka, 22, has been the main man at Zulte-Waregem since joining them on loan from Belgian Pro League rivals KAA Gent at the beginning of the season. He has been directly involved in 26 goals (scored 11 and made 15 assists) in all competitions this season in 37 games as the modest side chase a European spot. He has underlined his fine form by scoring in each of his last three matches.

The young Nigerian, with dreams of soon playing for the Super Eagles, was on target on Tuesday as Zulte-Waregem, playing at home, defeated Waasland-Beveren 8-0 to win their group in the Play-Offs II for a Europa League place.

“It was a great win from the team,” Olayinka told CSN. “It was good for us and for me to score. I feel happy to have scored, just like every player after scoring. I’m happy as well for the team. It was a good one for us.
“We tried our best to get the three points and now we’re looking forward to playing again on Friday (away to Oud Heverlee), though we’ve qualified for the final of the Play-offs II. I’m  looking forward to the possibilities. On to the next one.”

Olayinka, who can play in several positions in attack, believes the loan move to Zulte-Waregem has been a beneficial one for him on a personal level. 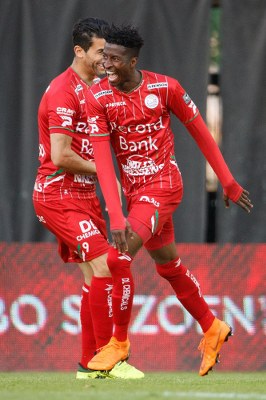 “For the season so far, it’s been very good for me because I think I developed well this season,” he added.
“I believe I’ve had a very good campaign so far. At least I’ve got 11 goals and 13 assists (in the league) and I believe it’s been good for me. I feel very happy about it and I feel good. I’m looking forward to performing even better next season.
“I feel confident and I believe in myself more after what I’ve achieved this season, though the season isn’t over and there’s more to come from me.”

Olayinka praised his teammates and the crew for their efforts in taking Zulte-Waregem this far.

He told CSN: “The whole team has been fantastic although we had some bad moments in the course of the campaign. But later on as a group we came back stronger in 2018 and we made some unbelievable strides.
“We’ve done well and we’re proud of ourselves, each and every one of us. Everyone feels good, the coach, the players, the whole crew; we’re happy, even though we’re not in Play-offs 1 (the play-offs for the league title and Champions League spot). We’re doing our best in play-offs II and we’re doing everything possible to get the Europa League ticket. It’s been a good season for us.”
Having won their Play-Offs II group with 22 points from eight matches, seven points ahead of second-placed Kortrijk with two matches left, Zulte-Waregem are on course to clinch the Europa League ticket.