Liverpool forward Mohamed Salah has been included in Egypt’s 23-man squad for the 2018 World Cup despite being injured.

Salah, 25, went off against Real Madrid with a shoulder injury in the Champions League final on 26 May following a foul by Sergio Ramos.

It is however reported that Salah will not meet up with his team-mates until 9 June as he continues his recovery. 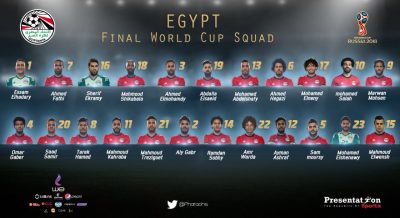 Egypt’s opening World Cup fixture is against Uruguay on 15 June.

They will meet hosts Russia on 19 June and conclude their campaign in Group A against Saudi Arabia on 25 June.