Gareth Southgate gave us our first taste of what England could look like at the World Cup on Saturday, as The Three Lions faced off against Nigeria at Wembley in the first of their two warm up friendlies ahead of their trip to Russia.

England won that game 2-1 thanks to an early goal from Gary Cahill and one from Harry Kane later in the first half. Alex Iwobi brought the visitors back into it, but ultimately it was England who walked away with a confidence boosting win and a decent performance to go with it.

On Thursday we’re expected to see Jordan Henderson back in the starting lineup after he was rested against Nigeria, whilst fellow Champions League finalist Trent Alexander-Arnold is likely to get some game time too. Apart from that, Southgate could give some of the other potential starters a spot in the opening lineup, with Harry Maguire, Danny Rose, Ruben Loftus-Cheek, and Marcus Rashford all being resigned to the bench last time out.

Costa Rica harbour some bad memories for a select few of this England squad. Four years ago they were held to a dour goalless draw in Brazil against Costa Rica, a game that helped the visitors overcome the odds and qualify for the knockout stages. They topped the group ahead of Uruguay, Italy, and England, with The Three Lions crashing out at the group stages for the first time since 1958 and finishing with just a single point to their name.
Costa Rica were also in action at the weekend as they strolled past Northern Ireland, winning 3-0 thanks to goals from Venegas, Campbell, and Calvo. However, their overall form isn’t that promising as they head to Russia. They have won just two of their last eight matches and have lost four of their last six. 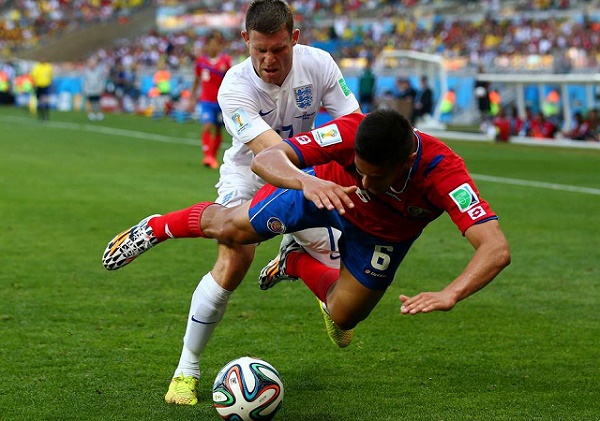 Three of these four defeats have seen them fail to find the net, and away from home they have lost four of their last five matches. England, meanwhile, are unbeaten in almost a year, winning six and drawing three of their nine matches since that friendly loss to France last summer. They have kept a clean sheet in six of these nine games too, and considering Costa Rica’s struggles in front of goal, we like the look of England Win to Nil alongside a 2-0 correct score predictions.

Harry Kane is, once again, the man to watch out for. He has another fantastic season under his belt, and his goal against Nigeria made it eight goals in his last seven appearances. We’re backing him to find the net on Thursday.

Costa Rica Predicted Lineup: Navas, Gamboa, Acosta, Gonzalez, Duarte, Oviedo, Borges, Guzman, Campbell, Colindres, Ruiz
HEAD TO HEAD
England’s one and only meeting with Costa Rica was the goalless draw in Brazil four years ago, when Costa Rica overcame the odds to finish top of that group ahead of Uruguay, Italy, and England. (Source)

ENGLAND VS COSTA RICA STATS
England have kept a clean sheet in six of their last nine matches.
Costa Rica have failed to score in three of their last five away games.
Harry Kane has scored eight goals in seven starts for England under Gareth Southgate.