Boxing heavyweight champion, Anthony Joshua extended his unbeaten run to 22 fights after brutally knocking out Russian challenger, Alexander Povetkin in the seventh round last Saturday. Now, only the WBC title held by Deontay Wilder is the only missing piece in his quest for world domination. In this interview with Complete Sports’ TUNDE KOIKI, top boxing analyst NNAMDI ‘HOLLYWOOD’ MOWETA reviews the Joshua vs Povetkin fight and Joshua’s quest to become the undisputed world heavyweight champion…

COMPLETE SPORTS: Nnamdi, you called it a knock-out win by Anthony Joshua, but it was a tough night for the Champion. Wasn’t it?

NNAMDI ‘HOLLYWOOD’ MOWETA: It was a great performance by Anthony Joshua – a very good win. The Russian showed a lot last Saturday night at Wembley. He was a legitimate contender, Povetkin. It’s what we call a world class heavyweight and the number one mandatory contender. It was a tough fight really because the first three rounds were really scary because Joshua allowed him to come inside. If you go back to our last chat, I said there was no reason why Joshua can allow Povetkin to come inside and run his combinations and run uppercuts. After he did that to Joshua in the first three rounds, Joshua had no choice but to adjust. 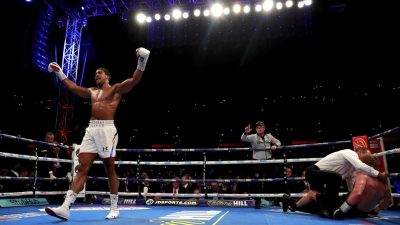 Hmm… Povetkin came out to fight and he woke Joshua up pretty early after busting his nose at the end of the first round?

Alexander Povetkin the fearless Russian, took the fight to Joshua and that made for a big heavyweight rumble. In the fight game, we call Povetkin a live dog. A live dog will come and fight. A live dog will not roll over, go to bed and crash out. Even going into the seventh round, Povetkin was still dangerous. He showed us that he was not scared of Joshua and not only that, even wobbled Joshua in the first three rounds. There were scary moments in this fight and we don’t want to see this when it comes to Deontay Wilder because Joshua was rattled and wobbled in those early rounds.

In your opinion, what did Joshua do right on the night to neutralize Povetkin and seal the win. Or did the size, power and longer rich eventually come through?

Power, size, longer reach, ability to read the fight – these are the things that made the difference last Saturday night. It comes down to adjustment, you know. If you can adjust to what you’re facing, you can read the fight – and I was very impressed that Joshua was able to do that during the fight. It is not about doing the same thing over and over. Joshua was able to adjust by fighting from the distance which we talked about in the past. Not allowing Povetkin inside to run combinations and score uppercuts to bruise you – to get you all bloodied. Joshua kept Povetkin outside, he used the jabs and ran his combinations till the seventh round and then he closed the show. 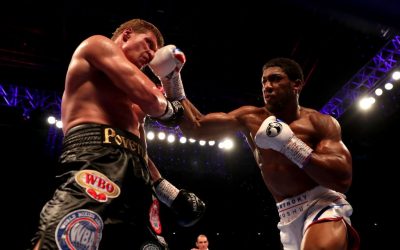 Attention now shifts to the 4th of December, when WBC title holder Deontay Wilder faces Tyson Fury in your backyard, the Staples Centre. I don’t know about you Nnamdi, but this looks like a total mismatch?

Yeah, total mismatch. In the first place, Tyson Fury has no business stepping into the rings with Deontay Wilder after just two easy fights in the comeback. Staying out of the ring this long after fighting Klitschko. I just don’t understand how anybody can call this a competitive fight come December 1. But hey! These are two sure men – two trash talkers. They will start their press conference on Monday in the UK and then go to New York City and straight to Los Angeles. They will hype the fight, they will do their thing and people are going to buy the tickets. Staples Centre holds 17 thousand people – it will sell out. But the damage will be at the pay-per-view because the fight fans know that Tyson Fury is no match for Deontay Wilder. So, the pay-per-view numbers will not be there and they’ll be lucky if they are able to get four hundred thousand pay-per-view buys. And not only that, Wilder has never headline a pay-per-view card in the USA! Wilder can barely fill his arena in the Alabama or the Barclays Centre in New York City. But will the fans be ready to put up 60, 70 or 80 bucks to pay for the pay-per-view? I will say no.

Finally, Joshua has April 13th 2019 at the Wembley locked in and he wants a big opponent for that night. Who do you think he should face. Deontay Wilder, Tyson Fury, or Dillian Whyte?

Anthony Joshua and Eddie Hearn are talking about AJ going back in November or December which I think he should do. They should give him something we call a ‘soft touch’ in the fight game. He just finished a rumbling with a Russian bear. Just get him a guy he can wipe out in three to four rounds, we’ll call it a good year, and then get ready for the April date at the Wembley. So that will be a good chance to see Joshua one more time before the year runs out and then prepare for the big one in the UK. But if Deontay Wilder knocks out Tyson Fury, Wilder will think he deserves a fifty-fifty split with Joshua. He will want the lion’s share of the money because knocks out the bomb in Los Angeles. Then negotiating for that fight will be impossible because everybody will want to grab all the money on the table. But if Deontay looks really bad against Fury and then wins, then they can make a deal and the big fight will be at the Wembley on April 13, next year. So it depends on what happens in Los Angeles on December 1 at the Staples Centre with Tyson Fury and Deontay Wilder. 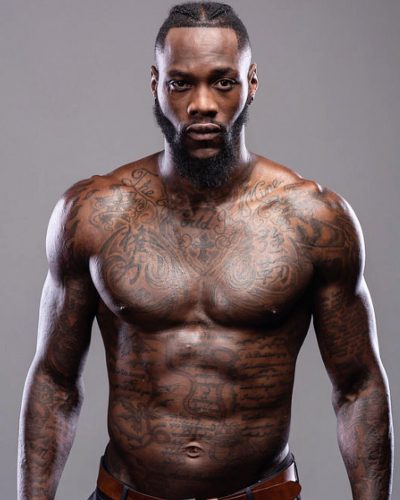 Deontay Wilder: In line for Joshua?