Super Eagles goalkeeper Francis Uzoho speaks about his experience of being in a losing side as a FIFA World Cup debutant after Gerhot Rohr’s team lost to Croatia in their first Group D match of the ongoing Russia 2018. The 19-uear-old Deportivo La Coruna keeper spoke to Nnamdi Ezekute at the Kaliningrad Staium, Russian shortly after the group’s  matchday one games on Saturday, June 16. Excerpts…
Uzoho, how would you describe the experience of playing your first match at the senior World Cup?
I wanted my debut at the World Cup to come with a win,  but we didn’t get it – the desired three points. So, I  won’t say that I am happy with that though it’s now on record that I made my FIFA World Cup debut against Croatia. I appreciate the coach and his technical crew for giving me the opportunity to make my debut against Croatia.
How did you manage your composure playing on your biggest stage so far in the game against Croatia at the Kaliningrad, Stadium.
The match against Croatia was the biggest stage that I have played, but definitely not the biggest crowd I have faced. I actually felt the same way I’ve always had it, trying to control the situation and help the team not  to concede a goal. I didn’t feel any pressure.
What do you think went wrong in the defeat to Croatia?
The team played well. For me the 2-0 result was not a very fair reflection of how the match went. We conceded an own goal, a lucky one for Croatia. It’s difficult when an own goal comes early in a game. It happens a lot in football, even worse things too which can unexpectedly turn the tide against your team. That’s what happened.  The Croatian team was good, but not fantastic.
I believe we wiil talk about the way forward, and work harder to win the next match. 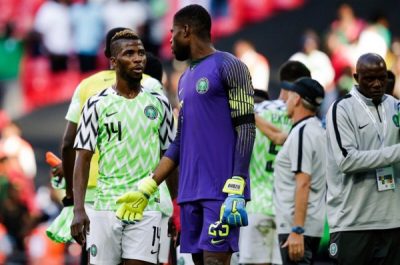 What is the experience like coming from a period of no international match to playing at the at the FIFA World Cup?
Everything that has happened within this short space of time has taught me that one just needs to be focused, learn and work very hard. As far as football is concerned,  you just need to do the one you can do – that is working hard in training and giving your best in any game you are selected to play because you don’t know what big opportunity may come your way. I just worked hard, it came and I grabbed it.
Are you now looking to establish yourself in the Super Eagles and become the new Vincent Enyeama?
(laughs) No, I am not the new Vincent Enyeama. I always want to be myself, Francis Uzoho. Enyeama is a great goalkeeper. He worked hard and made a name for himself. I want to carve a niche for myself too. I want to be Francis Uzoho all the way.
How is the competition like among  you the three goalkeepers in the Super Eagles here in Russia?
My colleagues, Ikechukwu Ezenwa and Daniel Akpeyi, are great talents. I respect them for that. Anyone can do this job for the team. Remember that it’s the coach that chooses who plays and who doesn’t. We support each other, whether you’re playing or on the bench. That team unity is important.
We all work very hard in training.  In football there will always be a competition for places in the team. It improves the overall well-being of the team. That’s how the goalkeepers are working with the rest of the squad.
Copyright © 2020 Completesports.com All rights reserved. The information contained in Completesports.com may not be published, broadcast, rewritten, or redistributed without the prior written authority of Completesports.com. How I make $10,000 monthly in Online SALES? apply the *Social Media Marketing Strategy* and watch your account balance swell. Buy eBook NOW!!!