By James Agberebi:
Africa’s representative at the 2018 FIFA World Cup, Tunisia, came from 2-0 down to force another World Cup bound team Portugal to a 2-2 draw in a friendly game at Estadio Axa on Monday.

Portuguese skipper Cristiano Ronaldo did not feature after helping Real Madrid win their 13th UEFA Champions League title in a 3-1 win against Liverpool in Saturday’s final.

Andre Silva and Joao Mario gave Portugal a 2-0 lead on 22 and 34th minutes, but Anice Badri pulled a goal back for Tunisia on 39 minutes.

In the 64th minute, Tunisia completed the comeback thanks to Fakhreddine Ben Youssef who made it 2-2.

France defeated Republic of Ireland 2-0 as they stepped up preparations for the World Cup in Russia.

Giroud’s goal against Ireland was his 31st for the 1998 World Cup winners and he thus equalled Zinedine Zidane in fourth place on the all-time top scorers list for France. 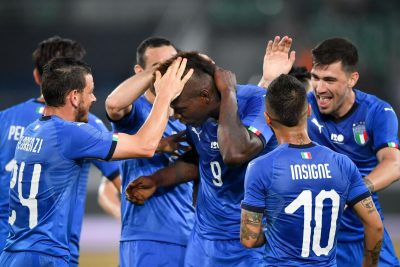 Mancini’s former player at Manchester City, Mario Balotelli, put Italy 1-0 ahead before Andrea Belotti made it 2-0 on 68 minutes.

Yahya Al Shehri reduced the deficit when he scored in the 72nd minute to end the game 2-1.

The game was Balotelli’s first for Italy after a four-year absence.

In another friendly encounter, Iran who will be in Russia lost 2-1 to 10-man Turkey.

A brace from Everton’s Cenk Tosun in the sixth and 50th minutes saw Turkey go 2-0 up.

Ashkan Dejagah scored from the penalty spot on 90 minutes following a foul committed by Omer Bayram which saw him bag a straight red card.

Also South Korea gave their preparations for the World Cup a huge boost as they saw off Honduras 2-0.