Completesportsnigeria.com‘s JAMES AGBEREBI presents how the five former coaches who led the Super Eagles to the World Cup and their teams fared as Gernot Rohr begins his own World Cup journey in Russia on Saturday…
CLEMENS WESTERHOF (USA 1994)
Self-styled Dutch-gerian, Clemens Westerhof, created history by becoming the first coach to qualify the Super Eagles of Nigeria to the FIFA World Cup.
Westerhof achieved the feat by guiding the team to pick the sole ticket for the USA 1994 World Cup ahead of Algeria and Cote d’Ivoire.
Under Westerhof’s tutelage, the Eagles did well by becoming the first African team to top their World Cup group on their debut despite being drawn against then red-hot Bulgaria, Argentina and Greece.
They opened their campaign with an impressive 3-0 win against Bulgaria, lost 2-1 to Argentina and overcame Greece 2-0 in their last group game.
Unfortunately, Westerhof and his exciting Eagles side’s 1994 World Cup adventure came to an end as they lost 2-1 to eventual finalists Italy after extra-time in the round of 16.
Despite not going too far in the competition, the Super Eagles captured the imagination with their exhilarating football and they were voted the second most entertaining team at the World Cup behind champions Brazil. 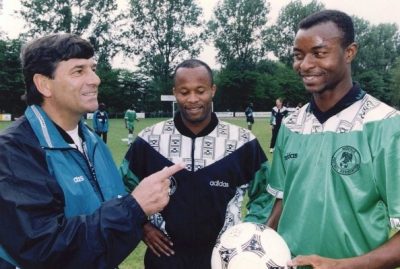 BORA MILUTINOVIC (France 1998)
Serbian-born Bora Milutinovic became the second coach to take the Super Eagles to the World Cup at the 1998 edition in France.
Milutinovic replaced French coach Philippe Troussier who had already qualfied the Super Eagles for the 1998 World Cup.
The Super Eagles became the fourth team after Mexico (1986), Costa Rica (1990) and USA (1994) that Milutinovic would handle at the World Cup.
Despite a very poor run-up to the World Cup (losing 1-0 to Germany, 3-0 to Yugoslavia and 5-1 to Netherlands in friendlies), Milutinovic’s Eagles stunned one of the tournament’s favourites Spain 3-2 in their first game.
They secured qualfication into the round of 16 with a hard-fought 1-0 win against Bulgaria before losing 3-1 in their last group game to Paraguay.
Just like in USA 1994, Milutinovic could not take the team any further as they were shockingly thrashed 4-1 by Denmark in the round of 16.
ADEGBOYE ONIGBINDE (Korea/Japan 2002)
Adegboye Onigbinde became the first Nigerian coach to lead the Super Eagles to the World Cup during the 2002 edition co-hosted by South Korea and Japan.

Onigbinde was drafted in after the late Amodu Shuaibu had secured qualification but, unfortunately, he could not guide the team, which was shorn of several senior key players including Sunday Oliseh due to disciplinary issues, out of a very tough group that had Argentina, England and Sweden.
Despite a spirited effort in their opening game, the team lost 1-0 to Argentina before eventually crashing out following a 2-1 loss to Sweden.
In the last group game against England, Onigbinde made changes to the Eagles’ line-up with the likes of Vincent Enyeama, James Obiora and Femi Opabunmi featuring.
The Eagles held a star-studded England side to a 0-0 draw with Enyeama making a superb save off a strike from Paul Scholes.
LARS LAGERBACK (South Africa 2010)
Experienced Swedish coach Lars Lagerback became the fourth coach to lead the Super Eagles to the World Cup when they participated in South Africa 2010.
Lagerback took charge of the team following the sacking of late Amodu Shuaibu but failed to qualify for the round of 16.
He was in charge of the Sweden sides to the Korea/Japan 2002 and Germany 2006 World Cups where Sweden got to the round of 16 on both occssions. 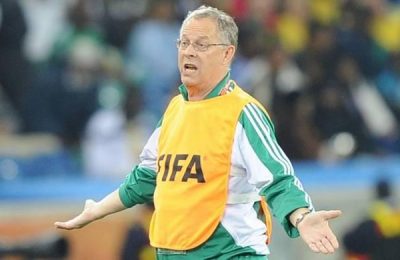 But at the 2010 edition in South Africa, the Eagles crashed out in a group that had Argentina, Greece and South Korea.
Their opening game saw them lose 1-0 to Argentina before they surprisingly down 2-1 to Greece after Sani Kaita’s red card.
Despite their opening two defeats, the Eagles still had a chance of qualifying for the round of 16 provided they beat South Korea by any goal margin.
Unfortunately, they could not as they only settled for a 2-2 draw, with Yakubu Aiyegbeni’s incredible miss a regrettable highlight,  hence exiting the tournament.
LATE STEPHEN KESHI (Brazil 2014)
The late Stephen Keshi had the honour of leading the Super Eagles to the 2014 World Cup held in Brazil.
In 2013 in South Africa, he became the first indigenous coach to win the Africa Cup of Nations for Nigeria. 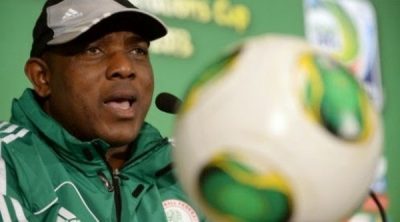 At the 2014 World Cup, Keshi joined the duo of Clemens Westerhof and Bora Milutinovic as the only coaches who led the Eagles into the round of 16.
The Eagles navigated their way out of a group that had Argentina, Iran and Bosnia Herzegovina.
After a disappointing 0-0 draw against Iran in their first game, the Eagles pipped Bosnia 1-0 in their second group game before losing 3-2 to Argentina.
And once again, just like in USA 1994 and France 1998, Keshi’s side were ousted by France 2-0 in the round of 16.
Copyright © 2020 Completesports.com All rights reserved. The information contained in Completesports.com may not be published, broadcast, rewritten, or redistributed without the prior written authority of Completesports.com. How I make $10,000 monthly in Online SALES? apply the *Social Media Marketing Strategy* and watch your account balance swell. Buy eBook NOW!!!