Nigeria’s pair of Segun Toriola and Olufunke Oshonaike suffered a humiliating 4-0 defeat in the final of the mixed doubles events at the ongoing 2018 ITTF-African Championships at the Beau Bassin Sports Complex in Mauritius, reports Completesportsnigeria.com.

On Saturday, the tournament enters crucial stage in the men’s and women singles category as players fight for places in the last eight of the championship.

Olajide Omotayo will face Andre Elizandro of Angola, while Toriola will battle Youssef Abdel Aziz of Egypt as he seeks his third men’s singles title. Bode Abiodun will also face Mawussi Agbetoglo of Togo for a place in the round of 16. 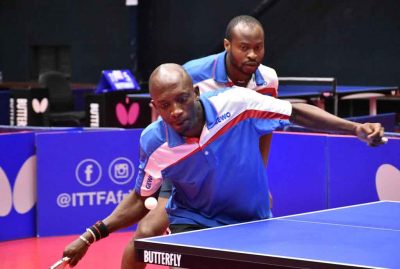 In the women’s singles event,Funmiola Ajala will face a stern test when she takes on Egyptian top ranked table tennis star, Dina Meshref in the round of 32 on Saturday . Meshref increased her gold medals to two having won the first gold medal in the women team event and another gold in the mixed doubles event.