Alex Iwobi scored his first goal of the season in his first start for Arsenal for who suffered a 3-2 defeat to Chelsea at Stamford Bridge on Saturday, reports Completesportsnigeria.com.

Pedro Rodriguez and Alvaro Morata grabbed the opening two goals for the Blues in the first half before Henrikh Mkhitaryan and Iwobi’s goals drew Arsenal level.

It was the first time since 1992 that Arsenal have lost their opening two games in the EPL.

Chelsea started the match brightly, but it was Arsenal who had the first chance of the game. Pierre-Emerick Aubameyang fired a tame shot at Kepa Arizabalaga in the first minute which was well saved.

Mesut Ozil also had an opportunity to score in the third minute but he sliced Nacho Monreal’s cross wide. In the ninth minute Pedro finished off slick move started by Jorginho to put Gunners to the sword early.

Arsenal responded through Aubameyang who fired his shot pretty straightforward at Kepa who saved it easily.

Morata doubled Chelsea’s lead latching on to pass from Cesar Azpilicueta in the 20th minute to cut inside Shkodran Mustafi before firing his shot past Petr Cech for his first goal of the season. The goal was Morata’s first in his last 16 EPL games for Chelsea. 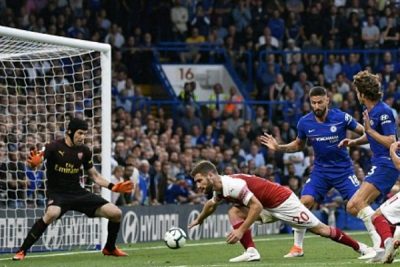 Mkhitaryan pulled one back for Arsenal when he fired in a low drive, from Iwobi’s cut-back, past Kepa to make it 2-1 in the 37th minute. And with four minutes left to play in the first half Iwobi slammed in a cross from Mkhitaryan to draw Arsenal level at 2-2.

Iwobi missed a chance to put Arsenal ahead in the additional time of the first half when he fired Mkhitaryan cut-back cross over the bar.

In the second half, Unai Emery replaced Granit Xhaka with Lucas Torreira while Maurizio Sarri brought Matteo Kovacic and Eden Hazard for Ross Barkley and Willian as Chelsea went in search of the winner on the hour mark.

Iwobi was replaced in the 74th minute by Alexandre Lacazette while Oliver Giroud came on for Alvaro Morata with 15 minutes left to play.

Alonso tucked fired in Hazard’s cross through the legs of Petr Cech to give Chelsea an maximumn points from the encounter.