By Johnny Edward:
Alex Iwobi made his fifth English Premier League appearance of the season for Arsenal who made it six league wins in a row and nine wins on the bounce in all competitions on Sunday, thrashing Fulham 5-1 at Craven Cottage in London, reports Completesportsnigeria.com.

The game was Iwobi’s third league start of the season and it was also his 70th EPL appearance since he made his debut during the 2015/2016 season.

A brace from Alexandre Lacazette and Pierre-Emerick Aubameyang coupled with a strike from Aaron Ramsey secured a comfortable win for the Gunners. 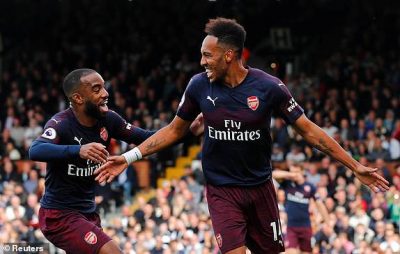 Lacazette shot Arsenal into the lead shortly before the half-hour mark with a clinical finish in the box.

Arsenal was in complete control of the contest, but Nacho Monreal’s mistake has allowed the Cottagers back into the game Andre Schurrle restoring parity with a lovely dink over Bernd Leno in goal for the Gunners.

Lacazette restored Arsenal’s lead after he latched on to a knockdown from Danny Welbeck before firing in a half-volley from 20 yards to beat Marcus Bettinelli in the 49th minute of the game.

It was Lacazette’s fourth goal of the season from five starts in the Premier League.

Ramsey came on for Iwobi in the 67th minute of the game and he made an instant impact finishing off a brilliant team play which he started, to make it 3-1 for Arsenal.

Aubameyang made it 5-1 finishing off a delightful pass from Ramsey in the 90th minute.