Anthony Joshua is eager to cement a legacy in heavyweight boxing with a win against Alexander Povetkin.

Joshua holds three of the four major heavyweight belts. Deontay Wilder has the other one – the World Boxing Council (WBC) title

“I’ve always done it for fun. I’ve had fun with it because I preferred the lifestyle it presented me.

“Now, I’m dead serious about this business. This is chapter two for me and Povetkin is the first on my list.”

“I used to concentrate on the opponents and I was always worrying about what was next. It was, ‘I don’t want to make mistakes with this opponent.’ I started boxing within myself, I stopped expressing myself. 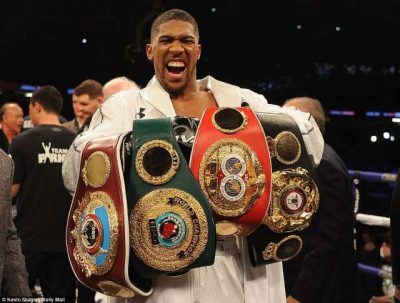 “All comers are welcome and, in this chapter, my mindset is different because I understand what I’m involved in. Alexander is the first person on my list.

“I think I’ve got 10 years left in boxing and I want to cement my legacy.”

Joshua who is unbeaten in his last 21 bouts burst into the public eye with his gold medal in the super-heavyweight division of the 2012 Olympic Games.