Nigerian-born British world heavyweight boxing champion  Anthony Joshua has revealed that his team are preparing to make an offer to Deontay Wilder that will set up the hugely anticipated fight which will determine who becomes the undisputed heavyweight champion of the world.

The IBF, WBA, IBO and WBO title holder added that if he was in Wilder’s position, he would be gladly accept the offer.

“I want that fight, no doubt about it. He was very vocal about wanting the fight before I was, because my objective was to accumulate every single one of the belts,” Joshua told Sky Sports.

“Now I have done that, Wilder’s my 100 per cent attention. We’re about to make another offer to Wilder’s team – a very good offer that should create a lot of interest from Wilder.

“Hopefully that will stop a lot of his talking and whining, and he can step up to the plate.

“I don’t know about Wilder and how serious he is. If Wilder offered me the deal I’m going to offer him – to come and fight for four belts, with a great rematch clause and a great up-front clause – I would grab that with both hands. 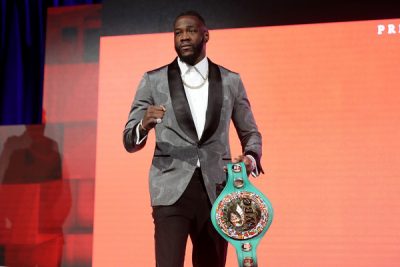 “I would be over the moon with a deal like that, so it will be interesting to see how he takes it.”

Joshua, 28, also stated that he would be happy to fight Wilder, 32, in the United Kingdom and stage a rematch in America.

“But I like the fact UK boxing is booming and we’ve cornered the market. I’m happy being based here and I think the first one has to be based in the UK – hopefully at Wembley or Cardiff. “

However, while Joshua is focused on agreeing a unification bout with Wilder, the WBA has installed Alexander Povetkin as the 28-year-old’s mandatory challenger.

When asked about facing the Russian, Joshua said:

“But I do want to hold onto all the belts, because I want the opportunity to become undisputed heavyweight champion. Hopefully the Povetkin situation can be pushed onto a later date, in 2019.”