Cristiano Ronaldo struck twice and Harry Kane hit his sixth hat-trick of 2017  as Real Madrid and Tottenham won on UEFA Champions League matchday 2 on Tuesday night.
Gareth Bale put the European champions ahead in the 18th minute before Ronaldo doubled the lead. However Pierre Emerick Aubameyang got Dortmund’s goal but Ronaldo’s second of the night ruled out any hopes of a Dortmund comeback.
In the other Group H game of the night, Tottenham Hotspur clinched a vital win with Kane scoring thrice against APOEL Nicosia  at the Neo GSP Stadium as they won 3-0. Kane has now scored five goals in his first two Champions League matches this season. 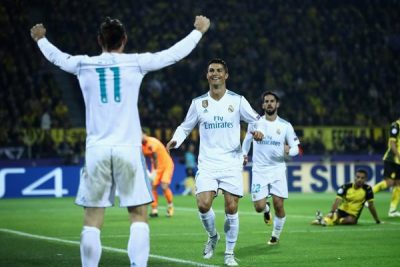 Liverpool held Spartak Moscow to a 1-1 draw in their Group E clash at the Otkytiye Arena. Two Brazilians, Fernando for Spartak and Phillipe Coutinho for Liverpool, were on target in the stalemate., Liverpool’s second straight draw after being held at home by Sevilla.
Also in Group E, Sevilla defeated Maribor 3-0 at the Estadio Ramon Sanchez with Wissam Ben Yedder grabbing a hat-trick for the Spaniards.
In Group F, Manchester City won their contest against Shakhtar Donestk at the Etihad Stadium with Kevin DeBruyne and Raheem Sterling winning it for Pep Guardiola’s men with their 48th and 90th minute goals in a 2-0 triumph.
Napoli’s Lorenzo Insigne, Dries Mertens and Jose Callejon were on target as they defeated guests Feyernord  in Group F at the Stadio San Paolo Stadium. Sofyat Amrabat scored Feyernoord’s only goal.
In Group G, Monaco  were handed a 3-0 defeat by .Porto at the Stade Louis II with Cameroon striker Vincent Aboubakar (brace) and Miguel Layun scoring for the Portuguese side while Besiktas defeatedRB Leizpig 2-0 in the other Group G match of the night. Ryan Babel and Talisca were on target.
TUESDAY MATCHES
Liverpool 1-1  Spartak Moscow
Sevilla3-0  Maribor
Manchester City 2-0   Shakhtar Donestk
Napoli 3-1 Feyernord
Monaco 0-3 Porto
Besiktas 2-0    RB Leizpig
Borussia Dortmund 1-3 Real Madrid
APOEL 0-3   Tottenham Hotspur
Copyright © 2020 Completesports.com All rights reserved. The information contained in Completesports.com may not be published, broadcast, rewritten, or redistributed without the prior written authority of Completesports.com.