By James Agberebi: Liverpool missed the chance to strengthen their top four spot as they were forced to a 2-2 draw by Tottenham Hotspur in a thrilling contest at Anfield in Sunday’s Premier League tie. Reigning African Player of the Year, Mohamed Salah, who had a brace and thought he had won the game for Liverpool after scoring in added time, but Harry Kane rescued a point for Spurs from the penalty spot.

Kane had earlier missed from the penalty spot with three minutes left in the game.

Also on target was Victor Wanyama who scored a screamer to make it 1-1.

The draw means Liverpool occupy third spot on 51 points, while Spurs who will host North London rivals Arsenal next Saturday are fifth on 49 points.

Liverpool got off to a great start as they took the lead in the third minute when Salah capitalised on a mix-up in Spurs’ back line before slotting past Hugo Lloris.

Spurs had their first chance in the 17th minute as Kieran Trippier played Heung-Min Son through only for Virgil Van Dijk to block his effort away for a corner.

A minute later, Liverpool went close to doubling their lead but James Milner’s shot deflected off Davinson Sanchez and flew just wide off the post.

With four minutes remaining in the first half, Moussa Dembele had a chance to draw Spurs level after Christian Eriksen’s free-kick dropped to his feet but his strike from the edge drew a smart save from Loris Karius.

Spurs came off the blocks in the second and were almost rewarded on 58th minute but had Karius to thank as he made himself big to deny Son from range. 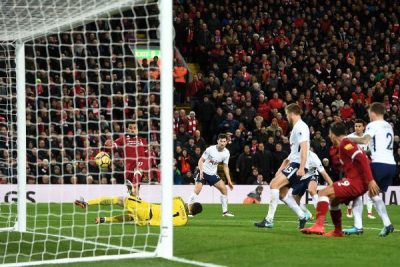 After being frustrated for most part of the second half, Spurs eventually drew level on 81 minutes thanks to Victor Wanyama who fired in from 20 yards.

In the 87th minute, Spurs had the chance to take all three points after they were awarded a penalty following Karius’ foul on Kane inside the box, but the Liverpool keeper made amends by stopping the England striker’s effort.

At the other end, Salah scored his second goal of the match and 21st of the season in the league in the 91st minute after weaving in from the right before lifting his strike over Lloris from range.

And when Liverpool thought they had won the game, Spurs won a penalty following a foul on Erik Lamela and this time Kane made no mistake as he scored from the spot on 95 minutes to end the game 2-2.

The last-gasp equaliser was Kane’s 100th goal in the Premier League in his career and the 22nd this season.