By Bamidele Boluwaji:
Former Nigeria captain, Nwankwo Kanu, has urged Super Eagles to get ready with fine form  ahead of their first game against Croatia at the 2018 FIFA World Cup, warning that the match is as important as the final to Nigeria, Completesportsnigeria.com (CSN)   reports.
The former Arsenal forward who has organised a five day basketball clinic which started on May 5 for Nigerian youths, says beating Croatia should be the Super Eagles’ priority.
According to Kanu,  victory in the match will give the Super Eagles confidence to face Iceland and Argentina in their subsequent games.
“The World Cup is fast approaching and soon everyone of us will be busy watching games and that is the joy of the tournament,”  the former Super Eagles captain told CSN. 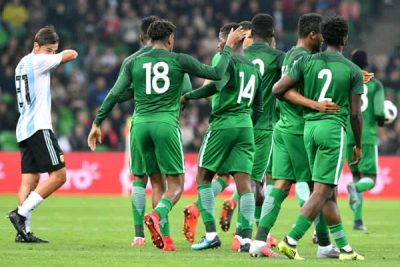 “We have to be very serious with the first game which is against Croatia and that is why I will urge our strikers to make sure they play aggressively to score goals and win the match. It is the first game but it should be taken as the final of the World Cup. If you start a tournament with victory, you will have confidence to play other games.
“I believe we have the players that can make it possible but they have to believe in themselves and also go for it. We can beat any team if we really give our best.
“None of the teams in our group is unbeatable and I hope the players will prepare their minds towards that” concludes Kanu.”
Nigeria will play Croatia on June 16 at the Kaliningrad Stadium, do battle with Iceland on June 22 at Volgograd Arena before facing Argentina on June 26 at Krestovsky Stadium Saint Petersburg in their last group game.
Copyright © 2020 Completesports.com All rights reserved. The information contained in Completesports.com may not be published, broadcast, rewritten, or redistributed without the prior written authority of Completesports.com.