By Adeboye Amosu:
Nigerian forward, Kayode Olanrewaju, will hope to win his first major silverware with Shakhtar Donetsk when they take on arch rivals, Dynamo Kiev in the final of Ukrainian Cup at the Dnipro Arena today (Wednesday), reports Completesportsnigeria.com.

Kayode, who celebrated his 25th birthday on Tuesday – May 8, is on loan at the Miners from English champions, Manchester City.

He spent the first half of the season with Spanish club, Girona where he failed to nail down a regular berth which prompted his decision to move elsewhere.

The one-time Nigeria youth international has scored three goals in five games in all competitions for Shakhtar. 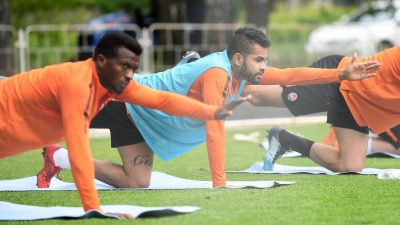 It’s the 17th time the Miners will be appearing in the final of the Ukrainian Cup and the 10th time they will clash with Dynamo Kiev for the ultimate prize.

Paul Fonseca’s men have won the Ukrainian Cup 11 times and are on course to win the double this season as they enjoyed a five point lead at the top of the table ahead of Dynamo Kiev.

They won the double last season and added the Ukrainian Super Cup title to their trophy haul at the beginning of this season.