Goals from Aday Girona and Cristian Portu handed the 18-year-old Nigerian shot-stopper his first defeat in the Spanish top flight.

Uzoho was beaten from the penalty spot by Aday Girona after Raul Albenetosa fouled Kayode in the box in the 25th minute of the encounter.

Two minutes later, Uzoho put his side under pressure with a poor clearance but his teammate Emre Colak came to his rescue. 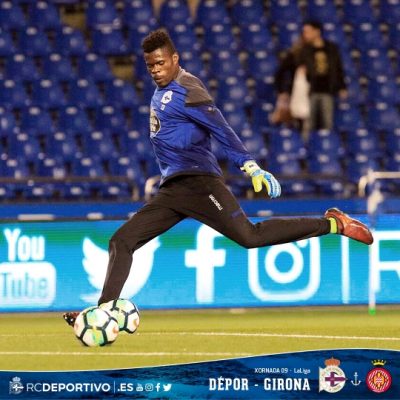 Former Golden Eaglets keeper Uzoho was called into action again by his compatriot Kayode who fired a long range shot that was saved.

Six minutes after the restart, Lucas Perez restored parity for Deportivo La Coruna after Jonas Ramalho pulled down the on-loan Arsenal forward in the box.

In the 82nd minute, Uzoho made a commanding save from a cross off the boots of Douglas Soares and he launched a quick counter attack from his half. The young Nigerian made a fine save off a deflected shot late on to keep the score at 2-1