Nigeria forward, Kayode Olanrewaju,  is in line to win the domestic double with his Ukrainian club, Shakhtar Donetsk who are up against Verez  in a league game  today (Sunday)  at the  Oblansky Sport Complex Metalist, Kharkiv, reports Completesportsnigeria. com.

Shakhtar  sit at the top of the league table with  51 points, six  more than their closest challenger,  Dynamo Kiev who have  garnered  45 points with two games remaining before the end of the le season. 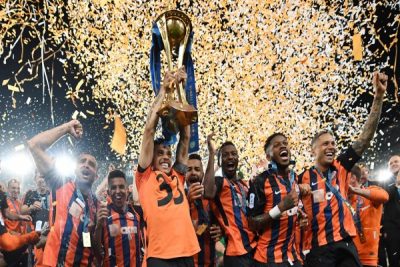 A win against Verez today will see them clinch the title ahead of the final game of the current league season next weekend.

The Miners won their 12th Ukrainian Cup title on Wednesday following a 20  win against Dynamo Kiev Kiev at the Dnipro Arena.

Kayode is on loan at the Miners from English Premier League champions, Manchester City.

The 25-year-old has scored two goals in four league appearances for Shakhtar since linking up with the club.