Liverpool manager, Jurgen Klopp,  claims his team is worthy of a place in the final of the UEFA Champions League after their semi-final aggregate win against Italian club, AS Roma.

The Reds lost the second leg, semi-final tie at the Stade Olimpico 4-2 but advanced to the final on 7-6 aggregate scoreline having won the first leg 5-2. They will face defending champions Real Madrid on the final on May 26 in Kiev.

Klopp’s men were made to sweat  in the Italian capital as the Giallorossi scored two late goals in the encounter. Quality betting sites here 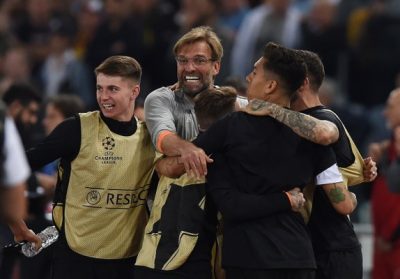 “We are deserved finalists 100%,” the German stated during his  post -match conference.

“You don’t come without luck. We needed it only one time tonight. Real Madrid needed luck yesterday too. That’s how it is.

“We have two very important Premier League games then let’s go there [the final] and try our best.

“The boys deserve it, the character they showed, the football they showed – it was just crazy. I forgot the score! It was 7-6 right? Unbelievable!”