Ezekiel who penned a two year deal at the club was also handed the No.39 Jersey CSN reports.

The 24 year old joins his compatriot Abduljaleel Ajagun at the club.

The former Konyaspor and Las Palmas forward revealed he is excited at the fresh challenge and vows to justifty himself in the team.

“I’m happy to be back in Belgium playing for KV Kortrijk,” Ezekiel who previously played for Standard Liege and Anderlecht.

“The objective is clear to help the team blossom this season and also get more time on the pitch.” 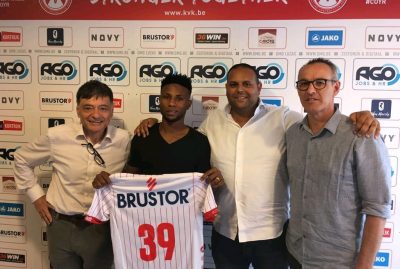 KV Kortrijk are without a win in their opening two games and are currently 13th in the Belgian Pro Division with just one point.

He will be in the stands to watch his new teammates face Club Brugge in a league game later on Friday night.