Kwese TV has announced that they will broadcast live on Saturday, 22 September Nigerian-born Anthony Joshua’s world heavyweight boxing title fight against Alexander Povetkin.
Joshua will hope to retain his International Boxing Organisation, World Boxing Association, International Boxing Federation and World Boxing Organisation heavy weight titles, while seasoned boxer Povetkin attempts to strip his opponent of the titles, securing heavy weight glory for himself. It is set to be another big night for Nigerian and British boxing one that boxing enthusiasts will not want to miss.

Undefeated Joshua is currently the unified heavyweight world champion, with three of the four major world championships in the sport to his name. He returns to the ring following his victory against Joseph Parker by a unanimous points decision in March of this year.

Former WBA champion Povetkin has 35 bouts under his belt, 34 victories, 24 of which by TKO. Povetkin has only recorded one loss to Joshua’s former opponent Wladimir Klitschko in 2013, since then he has won eight consecutive fights, including a knockout victory over David Price on the Joshua-Parker undercard. He will attempt to steal heavy weight glory from Joshua and continue his new winning streak.

Africa’s trusted source for premium sports content, and exclusive broadcaster for the fight, Kwesé TV, will deliver all the ringside action live from Wembley Stadium. Kwesé will provide ample coverage for the fight across its viewing platforms. Kwesé TV subscribers can enjoy live blow-by-blow action on their satellite TV decoders. Viewers who want to catch the fight on-the-go can do so through the Kwesé TV or Kwesé iflix apps. If you can’t tune in for the live action, Kwesé Free Sports will air a delayed broadcast of the fight on Sunday, 23 September at 6.00pm.

African audiences can join the estimated 90, 000 spectators expected at the Wembley Stadium by tuning into the various Kwesé TV platforms. 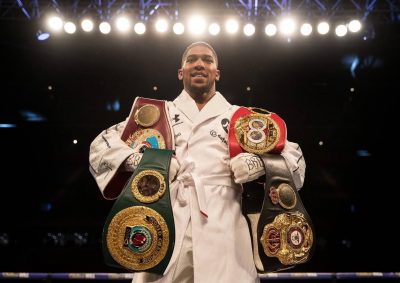 “We pride ourselves in broadcasting nothing but the best in international and African sporting action. As the home of premium sports content, Kwesé will once again provide exclusive coverage of yet another epic Joshua showdown. To catch the live action and see the continent’s son in action, visit your nearest Kwesé dealer to subscribe to the service or renew your subscription. This is one fight you do not want miss,” expressed Elizabeth Amkpa, general manager, Kwesé TV.

Boxing fans can also visit their nearest Kwesé branded store(s) to purchase a decoder and dish for N10,960, inclusive of one-month free subscription, to catch the fight on Kwesé Sports 1, channel 301 on the Kwesé TV bouquet.