The first half was a one-sided affair as Cowries suffocated Racing in their 30 meter line for almost the entire half as Captain Onoru Jatto cross over the line out wide but the touch judge flagged for forward pass from fullback Azeez Ladipo leading to the try.

It was tense start with Cowries dominating possession and territory but unable to break the deadlock.

Racing defended with their heart and the game seemed locked in stalemate. Two missed penalties from Cowrie kickers; Alfred Oche and Azeez Ladipo kept the score at 0-0 until just before half time when in what must have been their first visit to the Cowries half, Racing kicker slotted a long range penalty to take the pink men in 3-0 up at half time.

After a few changes including the arrival of Christian Ogar for Cowries, the reigning champions began to find their gears and the pace of Christian proved too much with him gliding over for 2 tries in the second
half.

A couple of consolation penalties from racing and another try from Cowries at the end saw a close match end 17-9. With onlookers impressed by the tenacity and quality of Rugby on show.

In the first match of the day, Eko II powered to a 25-7 victory against KC Old Boys.

Although still with work to do in the set piece, Eko II showed that on their day they can be a match for any team when they play wide. KC Old boys as the newest club in the league made a game of it and can hold their heads up as they look forward to improving throughout the season.

The final match of the day saw Police too strong for Gosar whose coach has clearly worked with them over the break. Nonetheless Coach Michael’s regular training and the professionalism of the police team proved too much for Gosar. 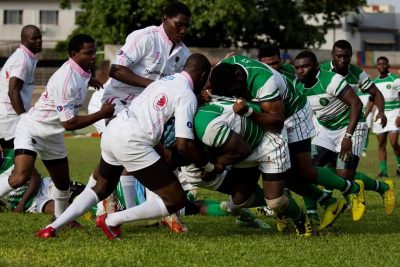 After these set of matches, in Division 1, Eco II RFC still top the table with 10 points, followed by Kings Collage Old Boys RFC with 4 points alongside Lagos RFC in third position also with 4 points too but a lesser point difference.

Dynamite RFC who initially had a one point from the first league match, had the point deducted for not pitching up, thus they are presently in 4th position without a point on the Division 2 Lagos Rugby League table.

Meanwhile after these second league matches, the Division 1 standings has drastically changed with the defending champions, Cowries returning to the top of the table with 8 points, closely followed by a resurgent Police RFC with 6 points.

Racing RFC is now in third position with 4 points, while Gosar RFC is yet to record a point yet

The National Rugby Leagues will go on break till nextJune 30th for the Ramadan fasting period. 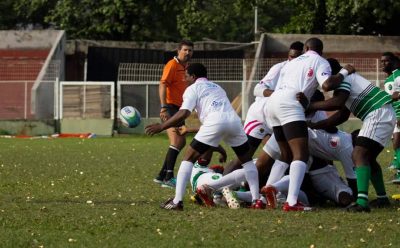