LaLiga, the best league in the world, will be part of the football festivities in Moscow this summer with ‘LaLiga Space,’ an interactive showcase at the heart of the city’s iconic Red Square.

The museum, located in the GUM department store, was opened at an event featuring LaLiga Ambassador Diego Forlan, LaLiga’s delegate in Russia Daniel Cerejido and legendary Russian LaLiga star Alexander Mostovoi and will run from 27th-28th June and 11th-15th July.

‘LaLiga Space’ will allow football fans the opportunity to get closer to the emotion and passion of Spain’s top division, watch videos of the most memorable moments in LaLiga history, learn more about its clubs, players and league, as well as discover the innovative technology that enhances the LaLiga viewing experience for millions of fans around the world every week.

‘LaLiga Space’ will open its doors on the 27th and 28th June, as well as the 11th, 12th, 14th and 15th of July, giving football fans plenty of time to personally see what makes LaLiga one of the most watched global sporting products in the world. This interactive and exciting museum located in Moscow’s GUM department store further highlights the global reach of LaLiga, from where 81 players have been selected across 22 national teams to play at the 2018 World Cup. In fact, all 20 clubs from the 2017/18 LaLiga Santander season have representatives at the tournament.

For the first time, the LaLiga Santander trophy will visit Russia, giving every fan the chance to have their picture taken with the main prize fought over by the likes of Lionel Messi, Cristiano Ronaldo, Antoine Griezmann and many other of the league’s top players. Visitors to ‘LaLiga Space’ will be able to check out a model LaLiga
changing room, sit by the lockers used by their heroes and take photos with their favourite stars’ shirts.

Official LaLiga balls from past seasons will be on show and an interactive map will allow fans to see which LaLiga players are representing their nations at the World
Cup. There will also be a space where visitors can experience El Clasico first-hand with 360° headsets and a GIF creator to capture fans celebrating goals like top LaLiga stars. 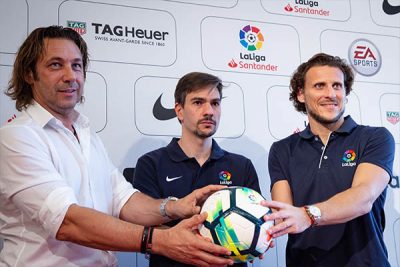 In addition, there will be the chance to meet a number of former LaLiga players who have starred at previous World Cups.

Football fans from across the globe will also have an opportunity to get close to many of LaLiga’s former players who will be present in Moscow, pick up some autographs and meet their footballing idols.

Javier Tebas, the President of LaLiga, said: “We look forward to welcoming all football fans gathered in Moscow for the 2018 FIFA World Cup to ‘LaLiga Space.’ This interactive venue will allow more people to discover our league, and, for those who are already familiar with LaLiga, allow them to go deeper into our story and heighten their enjoyment. One thing that’s for sure is that all fans will discover why it’s the best weekly sports spectacle in the world.”