Tennis legends Roger Federer and Rafael Nadal have been celebrating their rare partnership in the Laver Cup tournament.

The world’s top two men’s tennis players teamed up late Saturday night to defeat Sam Querrey and Jack Sock 6-4, 1-6, 10-5 to give Team Europe a 9-3 lead over Team World after day two of the Laver Cup.

It was the first time Federer and Nadal have teamed up outside exhibitions, and Federer expressed his pleasure on Twitter of being on the same side with his arch-rival for once.

“I could get used to playing on the same side of the net as @RafaelNadal ‍♂️,” the most successful tennis player ever Federer tweeted after their victory in Prague, Czech Republic.
“Although, still have to watch my back .” 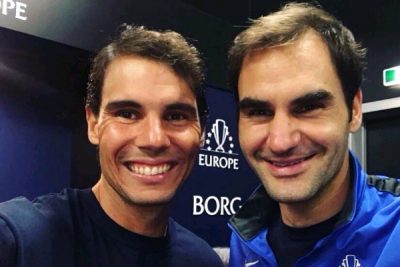 World No.1 Nadal was also delighted to have partnered his long-term rival in the new competition.

” with my doubles partner @RogerFederer! Happy to have played with Roger for a change @LaverCup #TeamEurope,” Nadal tweeted with a photo of the two legends smiling.

The Laver Cup is an international indoor hard court men’s tennis tournament between two teams: Team Europe and Team World. Team World is composed of players from non-European countries. Held annually (except for Summer Olympic years), the tournament will occur two weeks after the US Open, with more points awarded for wins as the tournament progresses.

The tournament is named after Australian tennis legend Rod Laver.