Bulgarian official, Bogdan Dochev, who failed to disallow Argentine star, Diego Maradona’s infamous ‘Hand of God’ goal in a World Cup match Against  England in 1986 died after being haunted by the controversial incident, his widow has stated.

Maradona punched an aerial ball past England goalkeeper Peter Shilton to score the Albiceleste’s first goal  in their 2-0 quarter-final win against England at the 1986 World Cup in Mexico.

The linesman, Dochev later admitted he had seen the Argentine striker punch the ball into the net. But he said referee Ali Bin Nasser had told him not to make any big decisions in the game.

Mr Dochev struggled to cope with the scrutiny he came under over the goal which knocked England out of the tournament.

He even scrawled “Maradona is my gravedigger” on a picture of the star.

“The referee said ‘You don’t have to do any work – it will be all my calls,” his widow told the sun.co.uk. 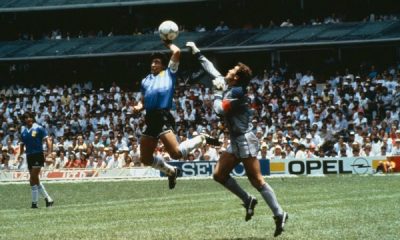 “After the World Cup our life was ruined.

“Bogdan withdrew into himself and friends never said hello to me again.

Earlier this year, Shilton said he still has a “bad feeling” towards Maradona because he never apologised for cheating.

After gauging opinion on social media, Shilton, 68, said he will refuse to meet Maradona if he comes to England this summer.

The Argentine said in 2005: “The truth is that I don’t for a second regret scoring that goal with my hand.”

Maradona visited Ali Bin Nasser ,
in  August 2015 and paid tribute to him by giving him an Argentine jersey bearing his signature, and referred to him as “my eternal friend.”