FULL-TIME results from the centres:

It’s all over in Jos! Plateau United are officially NPFL champions. The packed Rwang Pam erupts in jubilation. There will be parties all over Jos tonight.

GOAL! Plateau United 2-0 Rangers. The game is in aadded time. The Jos side are NPFL champions for the time ever!

Second half scores update from the centres:

Second half scores in other centres:

GOAL: El-Kanemi 1-1 MFM. The Lagos side equalise from the penalty spot through Okorom. They are not letting Plateau United off easily. The title race is still alive.

Meanwhile these are half-time scores from some of the centres:

Scores at the moment, 30 minutes gone in most of the centres:

As things stand, Plateau are going to be champions, Enyimba going to the CAF Confederation Cup, 3SC in grave danger. 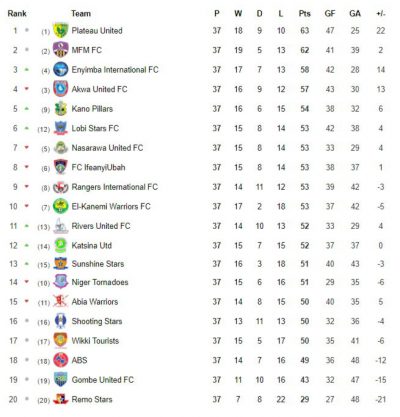 Welcome to Completesportsnigeria.com’s special coverage of the final day of the 2017 Nigeria Professional Football League with the Champions yet to be decided.

Will it be Plateau United or MFM? Who will get relegated along with Remo Stars and Gombe United? We will know in the less than two hours. The matches kicked-off across the 10 match centres at 4pm. We will update you in real time as the goals go in LIVE…