Liverpool Maintain 100% Record With Win Vs Tottenham At Wembley Liverpool continued their impressive start to the season following a 2-1 away win against Tottenham Hotspur at the Wembley Stadium on Saturday.

The Reds have now amassed the maximum 15 points from five Premier League games played so far in the current season.

Georginio Wijnaldum opened scoring for the Reds six minutes before the break.

Tottenham goalkeeper, Michel Vorm failed to hold the ball from a corner and it fell to Wijnaldum who nodded it home with goal-line technology confirming it crossed the line after Vorm attempted to claw it back.

It was Wijnaldum’s first ever Premier League away goal, his career at Newcastle and Liverpool combined. 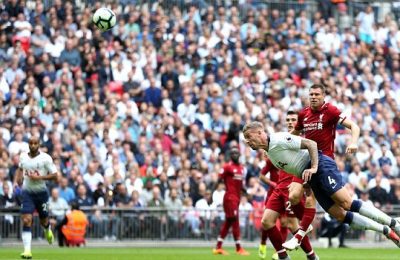 Jan Vertonghen deflected Saido Mane’s cross off his own post and Vorm failed to snatch the loose ball, allowing Firmino to tap home.

Substitute Erik Lamela reduced the deficit for Tottenham Hotspur in the third minute of added time.