Kano Pillars forward, Junior Lokosa, has hit the ground running in the Nigeria Professional Football League this season, scoring 15 goals in 16 games. In this interview with Completesportsnigeria.com’s (CSN) ADEBOYE AMOSU, the 24-year old speaks about his humble beginning and his desire to play for the Super Eagles at the 2018 FIFA World Cup in Russia…

CSN: Junior, there have been conflicting reports about your nationality, some say you are a Togolese. To some, you are a Beninoise, can you clear the air on this?

That’s a bit funny and interesting. Well, like you said, this is a big chance for me to clear the air on my nationality and set the record straight.

Junior Lokosa is a Nigerian, a Lagos boy from Badagry. I guess that settles the conflicting reports, like you said.

You have no doubt made a name for yourself in the Nigeria Professional Football League this season, what has the journey been like?

It has been tough like most African kids who started playing football on the streets. Unlike some kids who never enjoyed the support of their parents, mine was different.

Myself and my young brother who currently plays for a club in Egypt – I can’t remember the name now, enjoyed the support of our parents and that gave us the confidence to push hard, determined to make it in the game.

I grew up in Ajegunle Lagos and you know what it means to live in that kind of vicinity. We see football as something that can give us a better life as it has happened to some people in the past. 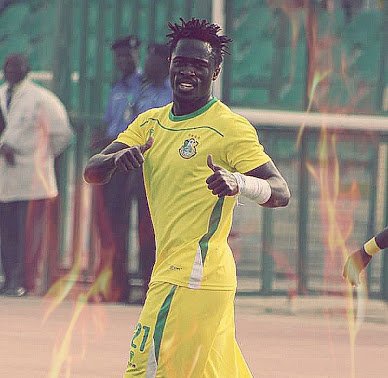 What has the journey been like for you, from playing for First Bank in the Nigeria National League then to becoming the number one striker for Kano Pillars?

I must confess it has been tough but the grace of God has kept me going. You know what it takes in this part of the world to become a footballer, lots of hardwork and luck.

But I have always believed in myself: that I could cut it at the highest level of the game. I joined Kano Pillars from First Bank during the second half of last season.

It was like moving to Barcelona, Real Madrid or Bayern Munich for me.

The fans are passionate about the game and it is a beautiful place to play football.

How were you able to settle down in the team especially with experienced strikers like Gambo Mohammed and Adamu Hassan ahead of you in the pecking order back then?

Last season was like a learning process for me. I must thank the older guys for helping me settle down in the team. Kano was quite different from Lagos in a lot of ways.

The weather can be very cold and at times extremely hot. But as I be Ajegunle Boy man must double up (long laughter).

I don’t see myself as a finished article yet and it is always important to stay humble and learn from the older and more experienced guys even though you are playing ahead of them.

You have hit the ground running in the NPFL this season with 15 goals in 16 games. Was it your target at the beginning of the campaign or has it happened by providence?

As a striker , you live to score goals. Scoring goals gives you confidence. Scoring in consecutive games early in the season gave me the confidence to push for more. 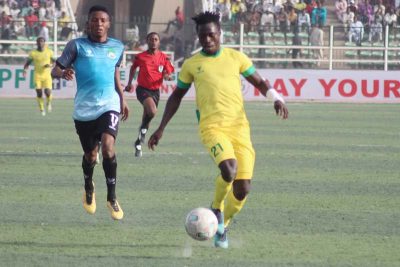 Do you see yourself breaking Mfon Udoh’s 23-goal mark all -time scoring record in one season in the NPFL?

It will be nice to do that, but that is not the most important thing on my mind at the moment. I want to be a Nigeria Professional Football League champion with Kano Pillars and I believe that is more important than chasing after an individual honour.

You must have been receiving a lot of calls from agents trying to lure you to foreign clubs?

Sure, they have been bombarding my phone with calls, saying a lot of nice things to me. I’m happy at Pillars and I don’t want to rush things.

When the right time comes, I will move abroad, but for now my soul and heart is with Pillars.
Sometimes, I wonder where all these agents are when I was nobody. I have seen players do well in the league, rushed out of the country and later regretted their action. I don’t want to make the same mistake.

Do you think you are good enough to play for the Super Eagles at the moment?

Bros you are funny o. One of the reasons why I’m playing football is because I want to wear that green and white of Naija(long laughter).

If I get the call to come and play for the team, I will gladly honour it. It will be a dream come true for me. Another AJ boy playing for the Super Eagles will be something else for people to read.

(Cuts in) I can’t determine if I’m good enough to play for the Super Eagles or not. If the fans believe in my ability and see me as a good prospect, that’s fine.
But the biggest decision lies with the coaches. Irrespective of what you are doing at your club or what the fans are saying, they will not be the one to determine your fate.

Do you see yourself solving the Super Eagles’ striker problem at the 2018 FIFA World Cup in Russia if given the opportunity?

I have confidence in my ability and I believe I can do a good job for the team. There are other established strikers in the team at the moment but I believe I can help make the team stronger.