Italy were denied a place in next year’s FIFA World Cup for the first time in 60 years after Sweden knocked the Azzuri out 1-0 on aggregate over two legs in the European play-offs.

Italy join the Netherlands, USA, Chile and Ivory Coast to miss out on the 2018 Russia World Cup.

Makinwa, who holds an Italian passport and played for Lazio in Serie A, told Completesportsnigeria.com: “This is not the same Italy that we used to know.

“There used to be many outstanding players but now, they are all normal.” 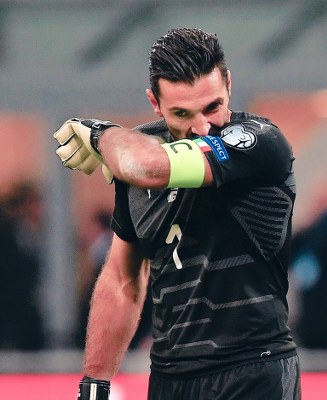 “Those who’ve played know how hard these matches are,” the 2006 World Cup winner told reporters. “We weren’t able to express ourselves at our best. We lacked the composure to score. Play-offs are decided by episodes and they went against us but you can understand that when you’re at fault.

“We have pride, strength and we’re stubborn. We know how to get back up again as we’ve always done. I’m leaving an Italy side that will know how to speak for itself. Hugs to everyone, especially those I’ve shared this wonderful journey with.

“Blame is shared equally between everyone. There can’t be scapegoats. Win together, lose together.”