Manchester United manager, Jose Mourinho, has criticised his side for making a number of incredible mistakes in their 3-2 loss to Brighton & Hove Albion on Sunday.

Glenn Murray and Shane Duffy made the most of some lacklustre United defending to fire the Seagulls into a two-goal lead by the half-hour mark.

Although Romelu Lukaku halved the deficit 11 minutes before the break, Eric Bailly’s rash challenge on Pascal Gross inside the area yielded a penalty which the German converted.

Paul Pogba then netted an injury-time penalty after Duffy brought down Marouane Fellaini but it proved too little too late for the Red Devils.

“We were punished by the mistakes we made,” Mourinho told reporters after the game. 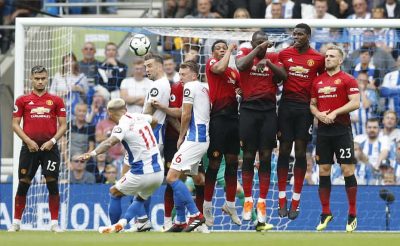 “For me that’s the story of the game. We made incredible mistakes in some crucial moments. Mistakes that killed us.

“Especially that third goal – we expected to come at 2-1 with positivity – then the third goal killed us off in the second half. Our second goal came too late.

“The week leading up was good and I expected the team collectively to be better. There are basic mistakes that makes almost an impossible mission to win the match.”