Manchester United will be boosted by news of the imminent recovery of Zlatan Ibrahimovic after the recuperating striker was tipped to return to action as early as December by former striker Andy Cole.

The 36-year-old, who signed a new one-year deal with the club in August, has been battling to recover from a serious knee ligament injury sustained in the Europa League clash with Anderlecht at Old Trafford in April.

Cole has also been using United’s facilities at the AON Training Complex as part of his recovery following a kidney transplant in April.

The former Red Devils striker, who is progressing well in his rehabilitation despite admitting it has been “a lot harder” than expected, says Ibrahimovic is showing signs he is getting close to a return.

“He is doing very good,” he told MUTV. “I had a chat with Zlatan when he was in the gym the other day. I think he is looking forward to coming back, most probably in December or January time.

“I think he will definitely bring something to the football team, as we already know. After last season, he was fantastic. It will be nice to see him back when he returns.

“Like he keeps saying, he is not human. I love his banter and I think his enthusiasm for the game of football, and what he is around the complex, speaks volumes about him.”

Ibrahimovic’s return will bring some competition for £75million striker Romelu Lukaku, who enjoyed a superb start to his United career but has now gone two games without a goal. 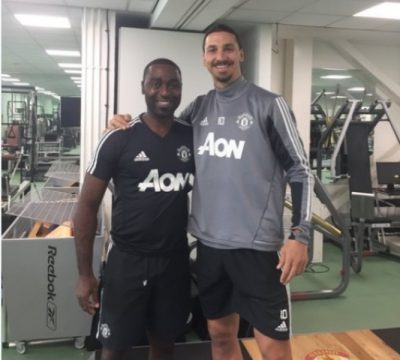 The Belgium international was criticised for his performance in the 0-0 draw with Liverpool last Saturday, after which Dejan Lovren accused him of deliberately catching him in the face with his boot following a challenge near the halfway line.

Lukaku has been accused of failing to impress against the Premier League’s best sides in his career in England but Cole does not expect it to unsettle the former Everton man.

“I don’t think he will take it on board, to be honest,” said Cole, who formed a devastating attacking partnership with Dwight Yorke in his Old Trafford days.

“I think people looked at his record when he was at Everton and West Brom, and that he had never done particularly well against the big teams. He never seemed to get himself a goal or get involved, but I think that will change at United.

“It was very difficult for him at Liverpool because he didn’t have many touches of the ball. But with the way the game went, he was always going to find it difficult and he did do. The flak he got was unwarranted but that is what he has to expect at Manchester United. Without doubt, he will take it in his stride.”

Cole also believes the draw at Anfield was a good result, despite the criticism of manager Jose Mourinho’s decision to adopt a defensive approach.

“It’s a strange one because, to be brutally honest, there aren’t many times when you go to Liverpool and draw 0-0,” he added. “I can only think back to some of the games we had and we had some proper ding-dongs, when you knew you would get goals. But in the end, in the grand scheme of things, I think 0-0 at Anfield is a good result because you have not lost the game.”