It was Dorados’ first win of the season and also their first victory in seven matches.

The Argentinian legend was named boss of the Mexican second division side earlier this month.

A hat-trick from Vinicio Angulo helped fire Maradona’s men to the 4-1 triumph.

The Sun reports that, afterwards Maradona, 57, joined his players and adoring new fans in a thunderclap on the pitch before going in two-footed on his doubters.

“We played a great match. Some people said Maradona’s useless. There were a lot of stupid people going on television to fill up the time,” The Sun quoted Maradona as saying.

“I hope they’ll come to the pitch now and look at my record and see what we’re actually doing, see that I know how to do this.”

Ecuadorian striker Angulo struck a quickfire double on the hour, and although Sebastian Ibars got one back for the visitors two minutes later, the hotshot sealed his treble from the spot before Alonso Escoboza added the gloss late.

Maradona added: “I’m not here to steal money from anyone. I came to work not to keep mouths shut.

“Nobody knows what I’m doing during the week with my coaching staff so that’s why some voices are silent now.

“There is no Maradona effect. I knew that we will win when I saw them train with desire, with hunger, these guys are hungry for glory.

An emotional Maradona explained: “I want to give Dorados what I lost when I was sick. I was sick for 14 years. Now I want to see the sun, I want to go to bed at night. I never even used to go to bed. I didn’t even know what a pillow was. That’s why I accepted the offer from Dorados.

“I’m taking on this responsibility as if it were a new child. Ever since I kicked my illness, when I was wasting away… I want to explain to you that when I was using I was falling apart.

“It was a step backwards and a footballer always has to go forward. That all stopped thanks to my daughters. I was left without a cent, I went back to work, my youngest daughter, who was four, convinced me, she said I had experienced things with Dalma and not with her.

“When I was in a coma and she touched my bedsheet to wake me up. Then I came out, and like everybody we are judged and we think we hold the truth, I wonder how many people there are here who have done worse things than us and they have not made the papers. I am here to work. 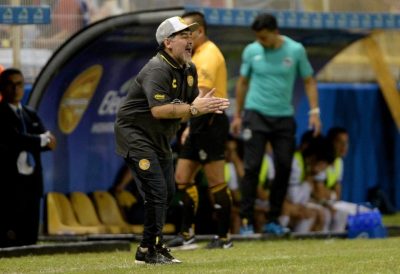 “I am here to give my heart like I did in Fujairah, where I drove 300 kilometres a day to work. When you put down that the club has no titles, make sure you put in the promotion.”

Maradona, who was referring to his time in charge of Emirati side Fujairah, has also managed Argentina as well as Al Wasl but will now be hoping to take Dorados back into Mexico’s first division.