Belgium coach, Roberto Martinez, has praised his side’s resilience and mentality in their 2-1 win over Brazil in their Friday’s 2018 FIFA World Cup Quarter-final match in Kazan, Russia, reports Completesportsnigeria.com.

Fernandinho’s own goal and a sublime finish from Kevin De Bruyne sealed Belgium’s fifth straight win of the tournament and ensured that the semi-finals will be contested by four European sides for the first time since 2006 Brazil coach, Tite, has admitted that Belgium were more clinical in the Friday’s 2-1 quarter-final win over his side in Kazan.

An owngoal from Fernandinho and a sublime finish from Kevin De Bruyne sealed a berth in the semi-finals for the Red Devils while a second half goal by substitute Renato Augusto was a only a consolation for the South Americans.. 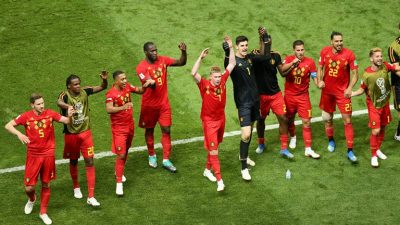 “Brazil have so much finesse and you know that they can cut you open,” Roberto Martinez said during his post-match conference interview on Friday.

“But I didn’t think for one second that the players would give up.”

“They’ve done something special tonight and I hope everyone in Belgium is very, very proud. It has created a nice memory and we should treasure it. But now we need more energy for our next game to try to make sure we’re just as good in the semi-finals.”

“When you play Brazil, I think you need to get a tactical advantage.” Against them, there’s a psychological barrier – the yellow tops, the five world titles and everything that goes with that. So we had to be brave tactically.”

“It was a big gamble to change things and we needed the players to believe. And today is not really about the tactics – it’s about the execution of those tactics.”

“There were a lot of threats to stop and Hazard and Lukaku gave us that with their positioning on the pitch. Today was about their mentality and I’m the proudest man on earth because I gave the players a very tough tactical assignment and the way they believed until the last second was incredible.”