Argentina’s campaign at this year’s FIFA World Cup was finally ended after they were outscored 4-3 by France in a thrilling round of 16 clash in Kazan on Saturday.

Teenager Kylian Mbappe was the star of the show, scoring two goals, with Antoine Griezmann and Benjamin Pavard the other scorers for France while Angel Di Maria, Gabriel Marcado and Sergio Aguero were on target for Argentina.

Mbappe, 19, becomes the first teenager to score more than once in a World Cup tournament since Michael Owen did so in 1998.

The last time Argentina got knocked out in the round of 16 was at the 1994 World Cup when they lost 3-2 to Romania.

France eventually took the lead on 13 minutes through Griezmann who converted from the penalty spot after Marcos Rojo wrestled Mbappe to the ground as the France forward went on a mazy run from his own half.

Paul Pogba should have doubled France’s lead on 21 minutes from a free-kick close to the edge of Argentina box from a foul on Mbappe but blasted his effort over the bar.

Argentina were back on level terms on 41 minutes off a superb left-foot strike from 25 yards from Di Maria which was their first shot on target.

Argentina got off to the perfect start in the second half as Mercado put them 2-1 up after deflecting Messi’s goal-bound shot past Hugo Lloris.

But the French equalised in the 57th minute thanks to a brilliant volley by Pavard close to the edge of the Argentine box.

In the 64th minute, France went 3-2 up through Mbappe who created space for himself inside the box off a cross before firing a low left-foot shot past Armani.

Mbappe made it 4-2 in the 68th minute as he finished off a brilliant counter-attacking move with Olivier Giroud laying the assist.

Messi, who had a poor game, almost gave Argentina a lifeline in the 85th minute following a mistake in midfield by Nabil Fekir but his weak low shot was well saved by Lloris after a brilliant run towards the French 18. 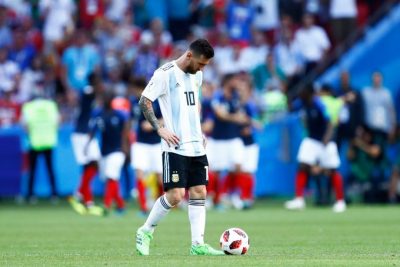 Aguero pulled a goal back in the 93rd minute as he headed in a cross from Messi.